How I Reclaimed the Final Girl as an Asexual 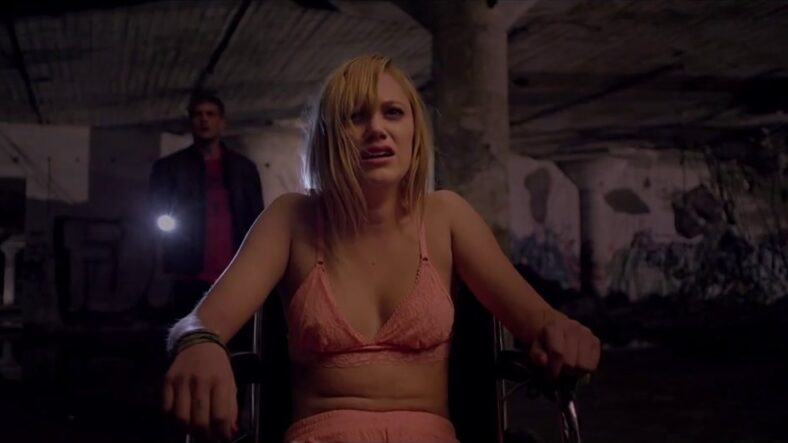 Everyone who loves horror has a soft spot for final girls. Though there are many that I gravitate toward, the one that holds the lock and key to my heart is Suspiria’s Suzy (1977). Entering a world of wicked whimsy and intimacy, Suzy navigates the dark facets of desire, but she doesn’t quite fit in. You can probably see how, as an asexual person, that journey feels somewhat familiar to me. Suzy is just one of the many empowering final girls rebelling and surviving throughout the vast spectrum of horror storytelling.

When I was thirteen years old, I fell in love. I stared at the large poster for Jennifer’s Body (2009) outside my local cinema. It was kept safe from my innocent and exploratory fingertips behind a thin layer of plastic. I thought Megan Fox was the prettiest girl I’d ever seen, but I wasn’t old enough to watch the film. Months later, after eagerly awaiting its release, I finally saw Jennifer’s Body, a film about Jennifer’s transformation into a demonic succubus, and her best friend from childhood, Needy. The film, being absolutely ahead of its time, explores the facets of intimacy and power that run deep in female relationships and sexual relationships with boys and men.

Needy made sense to me because she represented a sort of intimacy I’d scarcely seen anywhere else. She rejected the sexual norms I was being confronted with, but still explored and investigated desire in the hypersexual world she wandered through, where, for many women and girls, sex becomes currency.

As someone at the cusp of their coming of age years, Needy gave me realisation. This was a final girl who was soft and wanted me to understand that there were different sorts of love and intimacy.

Five years later, It Follows (2014) made its debut. I wasn’t a gawky teenager anymore. I was a fully-fledged eighteen-year-old who was starting to suspect she was a little bit asexual. While the world picked apart my asexuality, my peers started asking me if it was a phase, if I’d had the right sex, and if I could love as other humans did. I’d pushed myself to explore sex and desire, even if it hurt me, whilst simultaneously retreating from meaningful intimacy. But candidly, in the most simple words I can find, I felt ashamed about being asexual (and bisexual, too).

It Follows, reminiscent of Craven and Carpenter, overtly tackled the complex subject of human desire and our relationship to sex. The story follows Jay, who loses her virginity under false pretences, and soon afterwards is pursued by a superhuman creature that, as the title suggests, follows her at an unending, unwavering walking pace. With murderous intentions, the creature murders each sexual partner down a chain of which Jay is now a link. This was a story that pushed me to explore how decisions and impulses are often satisfied, navigated, and driven by human libido, survival instincts, and desire.

Every scene felt like a pressure cooker, pushing me to ponder the anxiety and shame that form around the subject of body and sex. Jay, (who wears the ghost of Carol Clover’s traditional final girl on her sleeve) became a vehicle to explore shame as she fought to survive the confines of an anxiety-fuelled, sex-conscious world.

Whilst still trying to understand my identity (and how to exist as I was), It Follows confronted me with the deeply rooted hypocrisy that our world frowns upon both the presence and absence of desire. It loves and hates it in the same breath. Jay taught me that understanding the expression, desire, intimacy, and coming of age isn’t always beautiful. Sometimes it’s ugly, and you must embrace the ugliness to survive. It’s part of the journey.

On a warm summer night sometime later, I watched Friday the 13th (1980). It felt wrong watching it beneath a fading blue sky, in dry August air. It was the sort of heat that would only be satisfied upon removing all your clothes, but I sat, uncomfortable, in the black turtleneck I’d pulled off a coat hanger when the morning had a slight chill. Throughout the viewing, despite my cheeks burning red and my forehead glistening with a sheen of sweat, the jumper stayed firmly wrapped around my upper body.

I watched Alice, this very traditional final girl, move through a world in which the presence of desire is frequently punished, only to get to the end to know that the absence of it is also punished, too. In this beautiful hot summer, there was something amiss under the surface. This world, dark, camp, and twisted, communicates an exaggerated view of the way society views sex and desire by punishing characters who both do and do not display interest in sex, stalking them equally around Camp Crystal Lake, machete in hand.

Alice was a final girl that responded to her fear with denial until the threat became too lethal to ignore. Even at the beginning of Friday the 13th Part 2 (1981), Alice is killed having still not confronted the lingering fear of Jason. This was a final girl that wanted me to embrace the messy. The moral of the story? While I watched this movie, I got a heat rash. I wish I’d just taken my jumper off and embraced the heat.

The first time I met Suzy, I’d slipped into one of the velvet seats at my local independent cinema for a 35mm showing of Suspiria (1977). The cinema was half-filled with odd bods. Me and my friend, Sarah (who is a life-long admirer of this film), sat side by side, anxiously awaiting the dimming lights, and the one-of-kind score by Goblin.

I have a soft spot for Suzy. From the moment we got off the plane together in the middle of that frightful storm and made our way to the unsettling and uncanny German dance school, The Tanz Dance Academy, I knew we would be lifelong companions.

The moment Suzy steps onto this uncharted terrain, where desire and dark whimsy tempt her at every turn, she experiences a strange, dissociative sickness. Whilst taking her time to explore every facet of this strange academy, understand the value of physical expression, and commune with all the strange and fantastical women that reside there, Suzy is confronted with a singular truth: she does not belong.

What I identified with is the experience of systemically having sexualisation and desire thrust upon me, trying to accept it, and becoming damaged as a result. Watching Suzy reject this desire (which is presented through images of body horror, dark crafts, and the occult) and reject the systemic power spoke deeply to my innate impulses as a human person. In those red velvet seats, surrounded by the scent of stale popcorn, and the sounds of gasps, I held my breath.

This response to desire, intimacy, fear, expression, and exploration was fascinating because it taught me that just like gender and sexuality, desire is also a spectrum. Though Suzy rejoices in the presence of other women, which I understood as a bisexual woman, I could relate to her fear of being confronted by forms of expression that weren’t in her nature.

Suzy gave me a full understanding of desire, expression, and intimacy, enough to piece together a sense of knowing I was who I was. I was asexual and that was okay. Because the umbrella of asexuality is so broad, Suzy and Suspiria helped me understand the different facets and layers of wanting, which for me was more dependent on emotional intimacy without anything physical. Suzy told me to hold on to the magic, love ardently, but be unafraid in setting boundaries where I needed them. My body was mine and if I didn’t want it to be used in certain ways, it would stay untouched.

Max, who appears in The Final Girls (2015), embodies the modern final girl, whilst also loving and respecting her predecessors. She is a final girl for everyone, for all sorts of women/people existing with their different impulses of desire and expression.

The Finals Girls is a love letter to the evolution of the final girl through pop culture. In this film, Max and her scrappy group of friends are transported into a campy, 80s slasher (called Camp Blue Finch), featuring a character played by her (since-passed) Mum. Max and her friends, alongside the cast of the film they exist within, are procedurally picked off one by one as Billy Murphy brings them to a gruesome end.

The first time I watched this film, unlike any of the other films, I watched it alone. I turned off the lights, curled up on the couch with a cup of tea, some cookies, and my Snuggie, and pressed play. From the score reminiscent of Friday the 13th and the mock trailer for ‘Camp Blue Finch’, it had me. In this love letter to genre cinema, I thought of all my friends who sit at different stops across the spectrum of desire, and how, even though we want different things, we still love each other, protect each other, and empathise with each other.

This final girl is self-aware whilst still being a non-sexual presence. She’s vulnerable, but still in control. And, interestingly enough, she experiences a vast range of intimacy throughout the film. Whether it’s friendship, familial, or romantic connections (without sexualisation), she embraces all forms of love that she experiences throughout the film, but stays true to who she is, unwilling to change herself to please others. Unapologetically.

Max gave me self-discovery and self-understanding. I think it’s only natural to reject what doesn’t reflect or validate your own experiences, but she taught me to embrace who I was and simultaneously embrace others, too. My read of this film was about a nonsexual presence (an asexual) standing up for those who differ from her in their identities because we’re so much stronger when we look out for each other.

I often wonder if I have what it takes to become a final girl. It’s because of Max, that if I ever feel a little bit lost in the obscurity of life, I sing Bette Davis Eyes, gather my strength, and live to fight another day.

Thank you to the final girls, from Alien’s Ripley (1979), to Ready or Not’s Grace (2019), and beyond. Whether they’re the traditional final girls from the shlock horror we love, or a new subverted take, we love you no matter what form you come in.

The spectrum of desire and expression is for everyone to explore in their own way. We all have our struggles with love, connection, and desire, and we’re all trying to survive these small battles. Storytelling through the lens of horror is just another way to see and validate these personal tribulations and fears. Those who understand horror know how fear manifests and how it feels to navigate it alone.

The final girl, no matter what, survives.