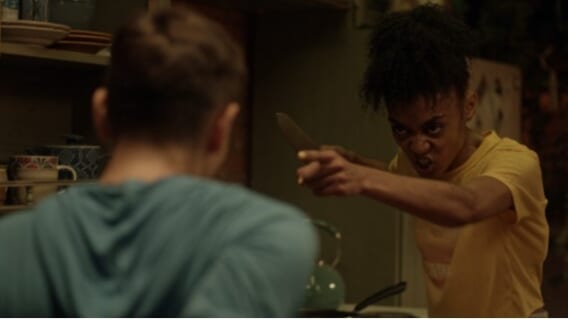 Being able to express rage is a privilege that only certain people get. As a Black girl I was denied the right to show how angry I was. If I twisted my face, thought about stomping, or looked like I might clap back then the situation would escalate. Sadly, as a Black woman not much has changed. Internet trolls get out of bed to compete in Microaggression Monday but my reaction to them is the only thing people notice. I was always the problem when I spoke up in grad school because there’s always an excuse for problematic white men. I spent so many years fearing being labeled an angry Black woman that I will never get back.

Weirdly enough my escape has always been watching horror movies. I love unwinding with slashers and a beverage. The irony that I retreat into a world where Black women are killed first, if we’re even present, isn’t lost on me. I have a running list of Black final girls and the numbers are so low it’s depressing. I feel like I’m screaming into the void as we get an onslaught of movies every year that refuses to fix this problem.

For all of these reasons, I always lose my shit when I see a Black woman slasher. It’s a very rare occasion but I make a point to see them all. Sadly, few of them are done well because representation is also lacking when you look at writers who get produced. I can only think of three recent examples that actually sparked joy for me. All three characters are strong, determined, and have turned to the slasher way of life as a reaction to the world around them. I find myself rooting for each of them the same way I would in any of the slashers from franchises that raised us. These are my sisters in rage and I love to see them taking up space in this subgenre.

In season three of Slasher Jen and her brother, Connor, get to play a long con on their quest for revenge. She’s the best friend with a sad story the whole season. When the reveal comes that she’s the mastermind behind these murders it’s pure gold. She angrily explains that she’s killed most of her neighbors because of the parts they played in her mother’s death. She revels in this moment of unadulterated rage. No longer needing to hide who she is, she turns on her stepmom in a way that would’ve made Billy Loomis proud. Seeing her finally deal with this presence in her home, this constant burdensome reminder of another person that failed her mother, is weirdly cathartic. Watching her go further off the rails when she finds out her brother is dead, and she’s now alone in the world, added five years to my life expectancy.

I lived for her performance. Morris brings this complex character to life in a way that makes you want her to get away with it. Her arc was my favorite part of season three and made me slightly less salty with the way season two ended. It’s the reason I came back for season four, and was treated to Black women gleefully wielding knives in what is the best season of this show so far. This was a stellar performance in a breakout role and I wish more people would talk about it. Understanding the restraint she exhibited makes her release that much more satisfying. Watching her bask in all of her rage and live her full angry truth is a thing of beauty.

Alexis gets the mad genius character journey that’s never afforded to Black women. She recovers her hearing through a traumatic and violent childhood event. This sets her on a journey of self-discovery as she tries to capture violent sounds. It’s a slasher, so the film escalates and she finds herself having to kill to satisfy her needs and buy herself more time. Because of what she gets from these murders, we even empathize with her for most of them. Her feelings of isolation, fear, and being misunderstood are palpable. When things get out of her control and she has to kill the one person she loves, it is her magnum opus. She literally joins her love of music to this person in one of the most slept-on, messed-up deaths of the last few years. She is literally amplifying her pain for people who refused to listen.

We are clearly living in the age of Jasmin Savoy Brown and we are welcome. This movie dropped before Yellowjackets and Scream 5, but is one of her best performances. Sound Of Violence has a lot of moving parts and she juggles them all like a she’s been doing this for far longer than she’s been alive. She gives us the tortured artist in a gothic romance that forces you to empathize with her. Her portrayal of this character feels like so many sympathetic villains, misunderstood monsters, blended with equal parts wounded baby bird that you want her to get away with it. You can’t look away and you find yourself wanting more time with her.

McKayla is one of my favorites. Not only is she living her best rich girl fantasy, but she’s murdering people for social media likes. Her and her best friend just have a hobby and are determined to reach their goals. While she spends most of the movie being pretty chill about everything, we see her embers turn into flames when her friend loses sight of their goals. She teams up with a serial killer and sets out to finish their sinister plan. When her and her bestie finally talk she drops the chill demeanor and gives us a front-row seat to her rage. She unloads how much she’s done for her over the course of their friendship. She then effortlessly kills the murderer she teamed up because no one lays a finger on her friend.

Shipp’s performance is so effortless and fun. I love this character for so many reasons. However, the moment she gets to let the façade down for a second is *chef’s kiss*. Hearing how they became who they are, and how she stays on task even though she initially was just along for the ride, gives the movie an unexpected layer. She’s a Black woman that’s carried more of a burden than she should. She’s here to finish the mission, but is also not going to be pushed aside. Everything happening in her face signals that she’s been more dangerous than we’ve given her credit for. I love to see it.

These three examples give me hope. Now that we have solid examples of Black girl rage in the slasher subgenre, we should be able to get more. I just hope it’s in my lifetime.

Let me know if you have more to add to the list at @misssharai.