'Bingo Hell' and 'Madres' are two pieces of Latinx horror chosen by Blumhouse for Welcome To The Blumhouse. This is why that's so important. 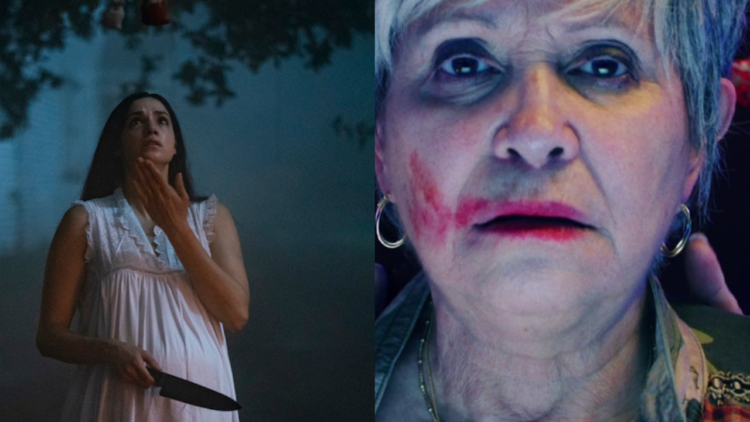 Growing up as a fan of horror and rarely seeing Brown faces on the screen was painfully obvious to my sister and me. That’s probably why we latched onto 1984’s Night of the Comet so hard. It gave us two badass final girl/sisters and of course, their male comrade in arms played by Latindio Robert Beltran. It’s also a really fun story, of course. But when I was a child, seeing someone with the same brown skin was a big deal. It IS a big deal. We’ve become so used to Latinos being cast as the “maids,” “gangbangers”, and landscapers. It’s demoralizing to see talented Latinx actors pigeonholed that way cinematically. It’s a running joke with my sister and me as we consume all these horror flicks: which way is that character of color going to bite it.

This is why Bingo Hell and Madres being showcased by Blumhouse in October, a month celebrating horror and Latinos, is just what my soul needs.

Shane McKenzie, Gigi Saul Guerrero, and Perry Blackshear not only wrote us a story with Latinx representation, but they interwove a familiar theme that culturally speaks to me. Yes, Bingo Hell is a gory, shock-filled treat for director Gigi Saul Guerrero’s fans. I’m here for that. It’s also an excellent introduction to Adriana Barraza for those unfamiliar with the Mexican matriarch, though. My mother loved Adriana and her character reminds me of my mom which I enjoy and miss. Well, with that attitude maybe others not quite as much.

Related: ‘Bingo Hell’: In This Exclusive Clip, Money Really Can Buy You Happiness

While watching Madres, you get director Ryan Zaragoza teetering on the brink of a drama. Then, he reveals its supernatural twist after we’ve become invested in the protagonist’s, Diana’s, story. It’s like watching a telenovela with a ghostly subplot. I won’t speak for anyone else, but my Mexican family loves to be scared by the supernatural. I don’t know how many times I was threatened with La Llorona or El Cucuy when the adults needed to get control of the kids.

Both movies are very different in the reactions and feelings they evoke. Bingo Hell entertains with its fun practical gore effects and gifts us with Adriana Barraza’s kickass abuelita character. Madres, on the other hand, sucks us in with an all too familiar story of feeling like the outsider, tosses a supernatural spin on it, and then schools us on our untold history. They entertain us in two very different ways. But in both, we get to enjoy strong Latino/a leads in a genre that doesn’t always feature us.

Bingo Hell may not be your cup of tea. I’m a fan of buckets of blood and am in love with practical effects. This is why I enjoy Gigi Saul Guerrero’s movies. What’s great about her stories is she will build upon a social issue in a way that allows you to consume the message without feeling clubbed over the head with it. Or in Gigi’s stories, maybe that’s the fate of an unfortunate character. If you’re a fan of carnage, gore, and over-the-top grisly fun, Gigi will deliver.

She stands firm in a subgenre of intense horror, predominantly led by white men. The fact that Bingo Hell was picked up by Blumhouse speaks of her ability to shock and entertain. Mexicans don’t shy away from death and its sometimes fantastical depictions. I once wrote a 20-page paper on La Santisima Muerte in college, and I can tell you I could have easily written many more pages. That is how close our relationship with death is. You’ve heard of Dia de Los Muertos, right? Mexicans stare death in the face all while enjoying their cafecito and pan dulce with their comadres.

This is why it matters to me to see Guerrero and Adriana Barraza representing us in horror. Gigi Saul Guerrero gives little kids (and grown-ass adults like me) hope in a genre often represented by non-BIPOC creators. Adriana offers us a strong, badass Latina who could easily be my mom, abuelita, or tia. She’s your comadre, tu hermana. She’s me.

Madres does something very different. Marcella Ochoa and Mario Miscione have written a story that combines our love of the supernatural with real-life horror. While not re-telling the exact story of the class action lawsuit of forced sterilization on Latina women, Madrigal vs Quilligan, Ochoa and Miscione are able to draw from that true painful history. If you want to learn more about that case, watch Renee Tajima-Peña’s documentary No Más Bebés. A heads up: prepare to get angry.

In Madres, Ariana Guerra’s character uncovers a “dirty little secret.” At the same time, her husband, played by Tenoch Huerta, is hired to lead a group of migrant workers because “Mexicans will listen to other Mexicans.” Eugenics was (is) a horrible practice, disgusting depravity that was forced upon the non-white, non-Christian, the “non-able bodied” persons deemed defective and unwanted. The United States was a perpetrator of the practice. It wasn’t just something our country traveled for either, like a holiday or business trip. It happened right here in the United States and only a few decades ago. Madres gives viewers a glimpse into that sick world.

Sterilization was a favorite eugenics tool forced upon unknowing Latina women. These women had no knowledge that they were signing off on the end to their fertility when they were giving birth in the hospital or consenting to a procedure. Controlling the Mexican population involved tubal ligations and hysterectomies done in secret while the women knew nothing of what was happening to them. The perpetrators have never been held accountable, even decades later. Madres highlights this shame in a medium that is available to a much wider audience. Director Ryan Zaragoza does so by borrowing from 1970s genre film to create and pay homage not only to those supernatural films, but also to our real cultural stories.

Bingo Hell tells of the importance of community, learning from our elders, and gives us La Comadre o Abuelita de Horror. Madres stars an actress from the Rio Grande Valley, a city just 30 minutes from my hometown. With her Mexican co-star by her side, they share a story that more people need to be aware of, a story that needs to be told. This is why two movies that Blumhouse chose to showcase in October matter.

Maybe you’ve already watched Bingo Hell and Madres and loved them. Perhaps you watched these two movies and only cared for one, or neither. And that’s okay. Just know that when someone like me speaks highly of these movies, there’s a bigger story behind those words. Yeah, I’m a sucker for a good ghost story, and I enjoy buckets of blood. But I also cheer for these movies because they were chosen to represent horror this month. In my own silly way it feels like I, too, was chosen. I feel seen and I feel like I matter.