You definitely need to check these out this Halloween season. 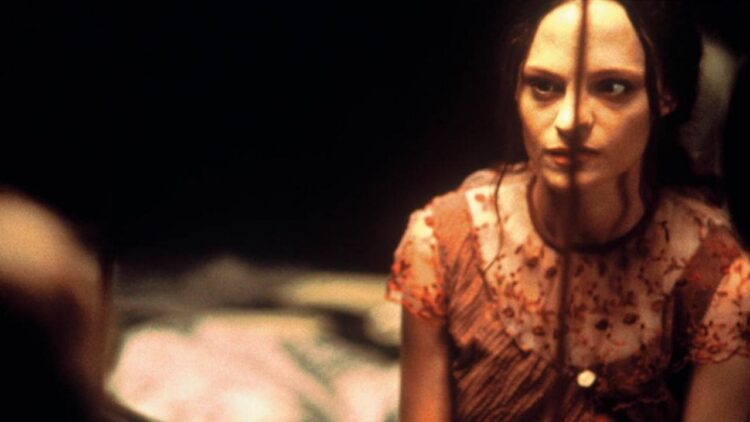 Typically women are cast as victims in horror movies, with one virginal soul being crowned the final girl. I’m always annoyed by the lack of women allowed to slice and dice, but even I can only ever think of a handful of femme slashers myself. I decided to expand my horizons and find more to add to the five I already know to give myself some variety. Here are ten that I’m excited to check out immediately!

In this made-for-TV slasher, three sisters return home for the holidays. There, their father tells them that he thinks his new wife is trying to kill him. The movie pre-dates the official slashers boom and is often left out of the conversation. I’m also just here for a slasher starring Sally Field and the late Jessica Walter. It doesn’t matter who the killer is because we’ve already won.

This one promises a scavenger hunt and a killer wearing a school’s bear mascot costume. Critics panned it when it came out and is often described as “silly” or “ridiculous.” I’m personally excited to see if it’s just bad or comically bad. The movie was originally titled The Scaremaker before being rereleased with the current title. If it sounds familiar you might’ve caught it in the ’80s.

A woman reading her mother’s diary in a retirement home starts to experience the events in the book. Often described as a horror mystery it takes place in a retirement home making it possibly one of the few slashers with a predominantly older cast. I’m optimistic that means screentime for older women on top of another chance to see a woman wield a knife.

A young woman is abandoned in an asylum by her director. The director then invites six actors to audition for her role at a remote mansion where, surprise, someone in a mask turns up and begins killing people. Critics hated it, but this slasher picked up a cult following and sounds like a bloody good time.

Where You Can Watch: Peacock

Norman Bates has been released from the institution he was sent to after the first movie. But death continues to follow him. However, this time he’s being framed for the murders by one of the women in his life. Anthony Perkins returns and is joined by Meg Tilly, Robert Loggia, and a pretty impressive cast. Gonna watch this back-to-back the next time I watch Psycho.

Where You Can Watch:  Tubi

Sorority pledges get trapped in a mall and have to fight off a killer. This one sounds like a generic coed slasher set in a mall, but word around the internet is that there is a twist that makes this one stand out above the rest. I am excited to check this one out and see if it’s as bizarre as the photos make it seem.

Muffy St. John decides to throw herself a birthday party on the family’s island and invite her college friends. This descends into murder and mayhem as it becomes a black comedy mystery slasher that has an ending that upset some audience members in its day. Everything I’ve read about it gives me big Slasher season 4 energy, and I can’t wait to figure out a whodunnit as Muffy’s plans are wrecked.

A killer follows a star and her friends to a cabin in the woods. This admittedly sounds like most slashers. However, I’m excited because the cast has so many Black actors, and that isn’t something I can say for most slashers. I’m hoping this results in at least a couple of Black characters making it to the end of the movie, and one of them being the killer because I NEED more Black femmes on the next femme slasher list that I make.

May has been picked on her whole life because she has amblyopia. She perseveres and makes a friend and finds a boyfriend, but something happens which leads May to choose violence. While this movie didn’t do well at the box office, critics loved it, and it has a cult following which is why it’s been on my radar forever. The movie also boasts babyfaced Angela Bettis, Jeremy Sisto, and Anna Faris.

Katherine Isabelle plays Mary Mason, a med student doing shady surgeries to pay her way through school. While the movie lives in the body horror sub-genre (and some might argue doesn’t belong on this list at all) I would argue that we don’t have enough women-led body horror movies to make a list for, so I’m okay with this cheat. We also don’t have enough femme-led slashers in the history of the genre, let alone this millennium. Also, it is written and directed by Jen Soska and Sylvia Soska, so we also get femmes behind the camera for a double win.

While I wish there were more femme slashers, especially from this millennium, I’m surprised that I was able to find this many currently streaming. I’m excited to add these to the usual suspects (like Friday the 13th, Scream 2/4, Tragedy Girls, and WTF) and get them into my rotation this Halloween season.

Let me know if I’m missing any movies on the regular streamers, or let me know if you’re also adding any of these to your immediate watch lists, @misssharai on Twitter!