“I Will Show Them What You’ve Done”: ‘Fear Street’ and the Ghost of the Unbelieved Woman 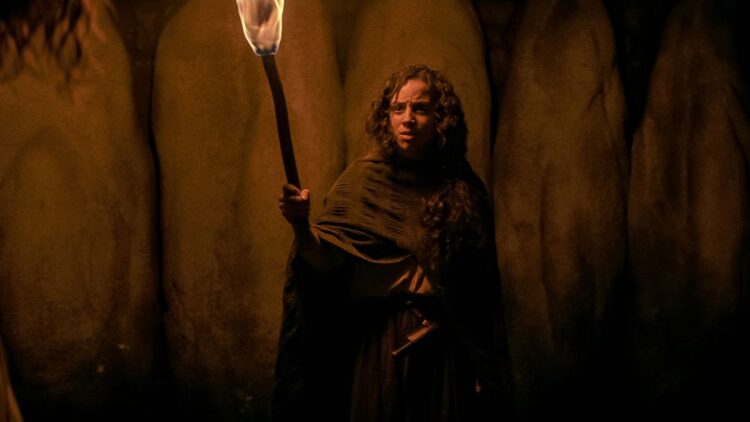 I have been a fan of Fear Street since I was 12 years old. I thumbed through worn copies from the used book store in the back of the family car on the way to grandma’s house. As my parents listened to the radio and pointed out interesting landmarks, I was lost in a world of evil spirits, murders, and ridiculous, classic R.L. Stine cliffhangers. So, as a long-time resident of Shadyside, I was absolutely thrilled to see, over a decade after I first picked up the series, Netflix adapting the books into a three-part film event.

I sat down for Fear Street expecting to have a good time with the mix of nostalgic teen pulp horror and R-rated violence. The first two films were pretty much what I expected, a little campy (sometimes literally, hello 1976), a little spooky, and pleasantly (surprisingly) sapphic. What I didn’t expect was for the third film, Fear Street Part 3: 1666, to have such a strong emotional hold on me. These films are not perfect by any means. Their flaws have already been discussed by critics who are a great deal more qualified to do so than I am. Nonetheless, the story of Sarah Fier and her journey from farmer’s daughter to legendary vengeful spirit knocked the wind out of me.

Sarah begins Fear Street Part 3: 1666 as a teenager doing her best to navigate life in her Puritan settlement. She takes care of her father and brother, while hiding the love she feels for the reverend’s daughter. When a woodland tryst with her secret love is exposed, the town blames her for its recent misfortune and accuses her of witchcraft.

As mass hysteria is whipped up and former friends turn on her, Sarah is able to confide in an older man named Solomon Goode. He presents himself as an ally to Sarah, a safe man that she can share her truth with. However, Solomon is not truly a friend. He’s a wolf in the hen house who made a deal with the devil to enrich himself, not caring who he sacrifices along the way. When Sarah discovers what he has done, he betrays her and turns her over to the townspeople demanding her blood.

As Sarah stands before the hanging tree, looking her former friend in the eye, she makes a promise to him: “I will show them what you’ve done…I will never let you go.” Her promise to him, that his betrayal would not go unpunished, that she would follow him for eternity until justice was done, echoed every quiet wish I have ever made about the men who hurt me.

I have known my fair share of Solomon Goodes. Men who went out of their way to present themselves as allies, as a “safe guy”, a “good guy”, but later proved to be anything but. There were mentors who betrayed my trust in them by eroding boundaries or exploiting their power over me. And there were friends who used me as a shield while they hurt other women behind my back. There were dates who cloaked themselves in progressive politics while still harming the women in their lives, who cracked my shell open to take a look at the trauma inside and used it against me later.

As a queer woman who survived sexual violence, who has been betrayed and feared speaking up because I didn’t think anyone would believe me, I felt Sarah’s righteous anger pulsing under my skin. Sarah does not survive her neighbors or the betrayal of Solomon Goode. But her spirit still keeps its promise. Her hand keeps its grip on him for hundreds of years, until she can break the curse and make sure her story is told correctly for the first time.

Though there is an inherent tragedy in stories of vengeful female ghosts, women discarded and destroyed so that the story can take place at all, I have always found comfort in them. Throughout global folklore, there are stories of women done wrong that return as spirits. They walk the earth, wailing and screaming, wringing their bloodied hands and tearing at their open chests.

As sad, and as frightening, as these stories are, I love the idea that there will be no rest for the wicked. That the echo of these women hurt by their fathers, their lovers, will reverberate for all time and never let the guilty rest. My rapist doesn’t know my name. I doubt he even remembers my face. I will admit that there have been plenty of nights I’ve imagined what it would be like to haunt him, face pressed to the window in a banshee’s scream, making sure he never sleeps through the night again.

As darkly satisfying as it is for me to imagine the torment of guilty men who expected to get away with it, the best version of the story of the vengeful female spirit is that in which she is able to warn future victims of the same man that took her life. Stories where the ghost is not just here to haunt, but to warn the next generation of women in an attempt to spare them the same fate.

Many variations on the Bluebeard myth, a story of a young woman marrying a wealthy man only to discover he murdered his previous wives, employ this. The spirits of the previous wives appear to the young woman, singing to her of their horrible deaths to frighten her away from her new husband before he can do the same to her. The same storyline appears in Guillermo Del Toro’s Crimson Peak, with seemingly terrifying apparitions tormenting Edith in her new home, only for her to discover that they are simply trying to show her the evil beneath the grandeur.

Like Bluebeard’s Wives and the spirits of Crimson Peak, Sarah Fier shows visions of her death to anyone who touches her bones. Finally, when two young women are willing to listen to Sarah’s story, they can break the cycle of violence that has gripped their town for centuries and threatens to claim them next. That, in spite of Fear Street’s flaws, resonates with me. For me, this adaptation of Fear Street took Sarah Fier and elevated her from a young woman made monstrous by history, to a patron saint of girls who refuse to stay silent.

Women who died tragically at the hands of men, whose stories were supposed to die with them, raising their voices even as their bodies rot in the dirt. They reach from beyond the grave, to make sure that what was done to them will never happen to anyone else. As more and more survivors become emboldened to speak about what happened to them, I find myself coming back to these stories and thinking of the other women who have felt like ghosts screaming to a world covering its ears.