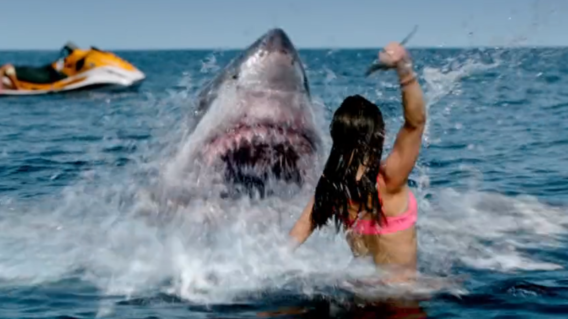 I had high hopes going into James Nunn’s Shark Bait. I was hoping for a film in the vein of The Shallows or 47 Meters Down. But Shark Bait is closer to The Requin in quality than it is either of the aforementioned titles. The flick is hindered by a less-than-stellar screenplay and features characters that are almost impossible to warm up to.

Shark Bait follows a group of friends that have come to the collective conclusion that playing chicken on a pair of stolen jet skis in the middle of the ocean is a fun and safe idea. By the time the pals realize that high-stakes oceanic horseplay isn’t all it’s cracked up to be, they are left with two wrecked jet skis and a party member with a gaping wound. Oops. At least the sharks will be eating well.

I will gladly concede that most people aren’t watching a film called Shark Bait looking for meaningful character development. However, the leads are two-dimensional to the point of making it impossible to get behind any of them. There is Milly (Catherine Hannay), the party girl that likes to have a good time; Nat (Holly Earl), the responsible and introverted good girl character destined for final girl status; and then, there’s Tom (Jack Trueman), Tyler (Malachi Pullar-Latchman), and Greg (Thomas Flynn). Each of the male characters are almost interchangeable. They cheer about everything, give high fives, make poor decisions, and say ‘woo’ a lot. And that’s what we’re working with here.

A lot of the film’s problems stem from a half-baked screenplay by Nick Saltrese. The picture’s scribe has scripted bland, irritating characters and then seems to expect the audience to overlook the fact that they are 100% responsible for the mess they’ve gotten themselves into. That’s a bridge too far for me.

If the screenplay set the characters up as somehow getting lost and running out of gas, it would be much easier to feel a certain level of empathy.  But as it stands, I have very little sympathy for any of them. If you’re going to do something extremely dangerous and ill-advised, at least have the good sense to do it with the shore in sight.

The script is also lacking in originality. It comes across as a paint-by-numbers attempt to cobble together character traits and plot points from better films. In fact, most of the major plot points play out a bit like Adam Green’s Frozen with the chair lift swapped for a pair of jet skis and a shark taking the place of the wolves. The key difference being that Frozen has a likable cast of characters.

I fully recognize this is a horror movie. And I think it’s perfectly okay to stock your horror picture with a handful of characters that are simply there to serve as cannon fodder. But that works best when there is a well-developed lead and a couple of supporting characters with a bit of personality.

Also Read: It’s Alicia Silverstone Vs. a Bloodthirsty Shark in Gnarly Trailer for ‘The Requin’

What makes matters worse is that Shark Bait sees the key players trapped in the middle of the ocean on a jet ski for most of the film’s runtime. So, we don’t get a break from them. There is no reprieve from the bickering and selfishness amongst the leads. And none of them undergoes any major growth or learns a valuable lesson. Accordingly, spending time with them quickly becomes cumbersome.

The final nail in the film’s coffin is that there is nearly zero tension building. Instead of leading up to the ominous encounters under the sea with foreshadowing, an eerie score, and a jump scare or two, director James Nunn frequently drops scares into the viewer’s lap with little forewarning. That approach can be effective if used sparingly and strategically. But there is no rhyme or reason that I could identify here.

With a rewrite to make the core cast more relatable and some more effective attempts at tension building, Shark Bait could have been fun. The core premise has potential. But it’s never realized, making this picture a chore to sit through. If you’re keen to check Shark Bait out, you can rent it on demand as of the publication of this post.

The characters in Shark Bait are so obnoxious that their plight becomes nearly impossible to invest in.