‘A Taste of Blood’ Review: An Ambitious But Muddled Adaptation of A Classic Vampire Tale 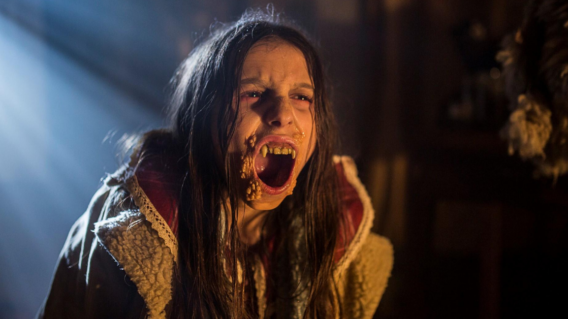 From writer/director Santiago Fernández Calvete, A Taste of Blood updates “The Family of the Vourdalak” to a rural Argentine setting in the modern-day. The 1839 short story, written by Alexis Tolstoy, centers on the experience of a French diplomat who witnesses a vampiric outbreak that consumes an entire Serbian village. Eschewing the unnervingly horny first-person account of Marquis d’Urfé, Fernández Calvete’s film instead evolves the narrative from an ill-fated romance. Natalia (Alfonsina Carrocio) and Alexis (Tomás Carullo Luzzio) are introduced as strays returning to the latter’s family home for support. The mystery of their arrival is embellished by Manuel Rebella’s atmospheric cinematography, which favors low-light panoramas, and an appropriately goth rock soundtrack. What follows is partially a tale of two young fools in love against a backdrop of sinister familial ties.

Initially, A Taste of Blood is a promising take on Tolstoy’s material. The script’s core theme of pushing back against a hereditary curse is crucial to the film’s family dynamics. Natalia and her relatives are notoriously reclusive and not of their own choosing. Aguirre (Germán Palacios), the patriarch, punishes Natalia for seeing Alexis. He locks her in a room and grounds her for a year. Aguirre’s extreme behavior is not challenged by either her brother or his wife. It’s clear that this, along with being prohibited from owning a cellphone, contributes to the sexist standards that dominate Natalia’s life.

The original story establishes that the vourdalak can only feed on the blood of those they love. Tolstoy challenges the reader with scenarios that use horror conventions to illuminate the threat of domestic violence. As the film progresses, however, it steadily loses its grasp on this thread.

For starters, the film completely fumbles with the introduction of the vourdalak. It should be a bigger deal to find out you’re related to a vampire. But what little tension is built up between the creature and Natalia is ruined by a vain attempt at heroism from Alexis. His character, by the way, becomes dead weight not 20 minutes after a decent set-up.

Immediately, the focus shifts from Natalia to her father. He reveals he is a descendant of Slovenian immigrants who fled the vourdalak in their home country. This anxiety hits a natural breaking point when Aguirre goes out hunting for this creature in order to stop him from feeding on his own kin. Following suit from old man Gorcha in Tolstoy’s story, it’s clear upon Aguirre’s return that he is no longer the man his family once knew. The layer that separates man from monster is interrogated. But, frustratingly, the impact of this development is continuously undercut by awkward shifts in tone.

A Taste of Blood never lacks in mood or narrative intrigue. But its characters are often thrust into baffling situations that splinter into conflicts without a clear resolution. Its scares also fail to build momentum despite alluding to the most harrowing aspects of the source material. In this regard, the film pales in comparison to “The Wurdalak,” a segment in Mario Bava’s Black Sabbath. To be fair, most films are pallid against the maximalist horror chops of the Italian maestro. What makes Bava’s adaptation successful, however, is that he immediately strikes at the heart of Tolstoy’s story while improving it to fit a pulp horror aesthetic.

Also Read: ‘The Innocents’ Review: No Kid Is Safe In The New Dark Horror Film

The pacing of “The Vourdalak” is practically break-neck compared to Tolstoy. It’s arguably some of the most brutal, nihilistic work Bava has ever done. Taking only the essential parts to weave a tale that leaves the audience worse off emotionally than they were before is a bold move that pays off on repeat viewings. But A Taste of Blood didn’t need Boris Karloff or extravagant set designs and photography to make a compelling film. In fact, by extending the lore of the family and balancing the interplay between Natalia and Aguirre, the film lets the dread inherent to the material breath. The most glaring issue is that it lacks commitment. Delving slightly into spoiler territory, even the cold execution of a child and a dog hardly registers in a flurry of plot contrivances that lead nowhere.

As it stands, A Taste for Blood has three different arcs vying for attention without cohesion. The romance angle that kicks off the whole thing, for example, becomes perfunctory by the end. Whatever sense of catharsis Natalia seeks is muted by inconsistent characterization, and the strongest themes can’t seem to take hold from scene to scene. At a distance, perhaps the film’s chaotic nature might be the most alluring thing about it. Carrocio and Palacios also steal the show by convincingly tapping into the uncomfortable depths of their characters. If what you’re craving is supernatural horror with backwoods drama shoved in, you could do worse.

If what you’re craving is supernatural horror with backwoods drama shoved in, you could do worse.