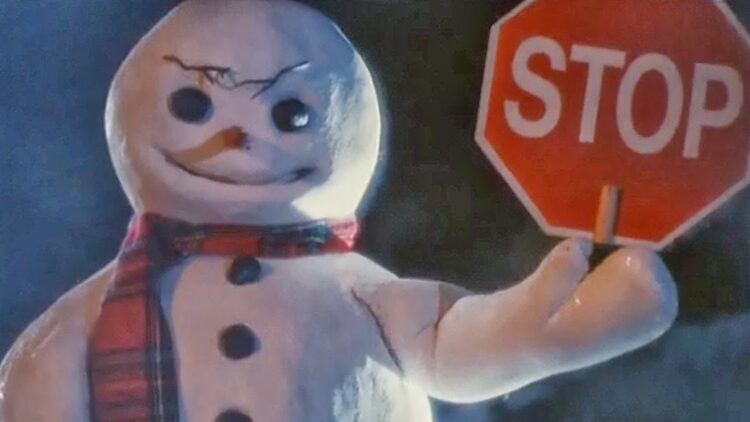 It’s difficult to give Jack Frost a straightforward critique. It’s not necessarily a good film in the conventional sense. But anyone that’s seen the flick (and enjoyed it) recognizes that director and co-writer Michael Cooney wasn’t setting out to make a serious or thought-provoking feature. Cooney was, however, trying to have some fun with a ridiculous, outlandish, and farcical premise. And I would argue that he succeeded at the latter.

The film sees aptly named serial killer Jack Frost on the way to his own execution. However, the madman gets a second chance when his prison transport vehicle collides with a genetic research truck. Following the accident, Frost is reconstituted as a snowman and carries on with his homicidal proclivities. Now, it’s up to small-town sheriff Sam Tiler to stop the deranged snowman before the town of Snowmonton is eviscerated.

Everything from the acting to the effects and the nonsensical storyline makes it impossible to take this picture seriously. But one should stop to consider that much of that is by design. The film is meant to appeal to connoisseurs of schlock. It isn’t terribly concerned with winning over viewers looking for something even a little respectable.

Also See: ‘Zombeavers’ is So Much Better Than it Sounds [The Overlook Motel]

With all that in mind, you can probably tell whether or not this film is up your alley prior to actually watching it. So, for those that appreciate a hefty helping of tasteless schlock with their horror, Jack Frost fits the bill. When I say ‘tasteless’, I’m not exaggerating. The sequence where Jack literally rapes a young Shannon Elizabeth to death is quite crass and a little shocking. So, bear that in mind if you are watching for the first time.

In addition to being tasteless, the characters are two-dimensional, the dialogue is uninspired, and the production values are low. But a lot of that is forgivable when stopping to consider that one doesn’t watch a film about a mutant, killer snowman expecting high art. We watch movies of this ilk for the camp factor, the gore, and the opportunity to laugh at the ridiculousness of it all. And I have to say Jack Frost does deliver pretty reliably in that regard.

So, let’s pivot to the reason you’re likely reading this review in the first place: the bonus content! How do the special features stack up? Well, this Blu-ray release does serve up a handful of enticing extras, particularly for anyone that doesn’t own release that Vinegar Syndrome put out a few years back.

The latest Blu-ray bow includes a slipcover, new cover art, and a collectible poster. Additionally, it features a brand-new commentary track by Hack the Movies. Listening to their Mystery Science Theater 3000-style commentary is perhaps best suited for watching the film alone, as it comes close to replicating the experience of watching with a room full of friends and a free-flowing supply of adult beverages. Tony Piluso and company lovingly lampoon the flick from start to finish and it makes for a great listen.

Also new to this release is a 42-minute-long interview with Scott MacDonald, who played Jack Frost. If you’re a fan of the film, it’s fun to dive into the film with the man that brought the titular character to life. It’s clear that MacDonald is a fan of genre cinema and seems to enjoy looking back on the role. My only criticism is that the interview was recorded over Zoom and ported onto the Blu-ray without any significant editing. So, it’s a bit rough around the edges. I would love to have seen the footage chopped up and condensed a bit so viewers could see the highlights reel, rather than every bit of the exchange in its original form.

The commentary track with director Michael Cooney is ported over from the Vinegar Syndrome Blu-ray release. It’s worth a listen if you are a fan of the film and haven’t had the occasion to check it out thus far.

Related: 5 Movies Where The Cold Was The True Evil

Among the remaining legacy features are another, shorter interview with MacDonald and a relatively brief chat with DP Dean Lent. Lent is a big fan of genre film and it’s interesting to hear him speak to the genesis of Jack Frost, its surprising roots in theater, and his experience on the project.

So, there you have it. This release offers some new extras for die-hard fans of the film. But anyone that already has the Vinegar Syndrome release may be slightly underwhelmed, as much of the bonus content is carried over.

Jack Frost is now available as part of the MVD Rewind Collection!

The characters are two-dimensional, the dialogue is uninspired, and the production values are low. But most of that is forgivable when considering one doesn’t watch a film about a mutant, killer snowman expecting high art.