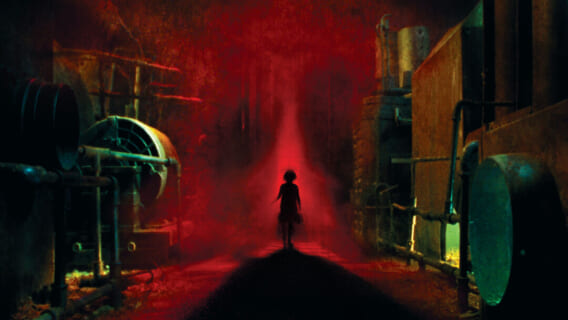 The look of Moon Garden instantly grabs your attention. Even the untrained eye would want to talk about the use of color in the opening moments. It turns out the movie was also shot on expired 35mm film with vintage rehoused lenses. This creates a striking look that sets it apart from most of the other movies we’ve gotten this year. It also tells you we are about to get into the fantastical even though we open on what looks like family drama.

Things take a turn when Emma (Haven Lee Harris) tries to run from her arguing parents and falls. She soon discovers she’s in a coma and is interpreting what’s going on around her body, through the lens of a child on the other side of the veil. This is where the Moon Garden goes fully into a dirty steampunk Alice In Wonderland adventure as Emma tries to make her way back to consciousness. She’s also only armed with a radio, which makes it hard not to draw a comparison to Silent Hill.

Because she’s a young kid she has to quickly figure out the line between friends and foes as she runs from a monster, a chattering monster with long gross nails that feeds off of her tears. The monster, Teeth, is played by Morgana Ignis, and what a joy it is to see Ignis’ disturbing work. The physicality and care brought to this creature are a thing of beauty. Ignis takes something that we mostly identify via teeth and nails and paints a whole story. I sincerely hope this isn’t the last time we see Ignis bring a monster to life because Teeth is probably my favorite character in the movie.

Director Ryan Stevens Harris crafts a beautiful world that I found myself wanting more time in. It often makes the plot feel secondary as we become absorbed in the surroundings, the danger, and the odd characters. Emma’s radio picks up what’s going on in her hospital room in the real world and often influences what’s happening in her subconscious. When her father talks about the kind of boys he assumed she would bring home when she was older, we meet Groom (Timothy Lee DePriest). Groom reminds us of band guys from the Panic! at the Disco era and fits her father’s description down to the boots. He’s surrounded by what feels like a grimy version of an early aughts music video that probably featured The Used.

Moon Garden’s world, and the imagery it provides, are what will keep audiences talking. It’s so absorbing that it makes it hard to dwell on things that aren’t working in the film. It’s truly about the journey rather than the friends we make along the way with this film. It’ll probably get a bunch of comparisons to Mad God or Labyrinth. Personally, it made me wish I could rewatch The Fall (2006). It should be noted that it only brings these movies to mind because of themes, or stylistic choices. However, it’s cool to see an indie movie go big and land somewhere among the stars.

Let me know if you have gotten a chance to watch Moon Garden at @misssharai.

Moon Garden is a fun ride that makes it easy to love. It’s equal parts rockabilly, heart, and wonder. It’s a feast for the eyes.