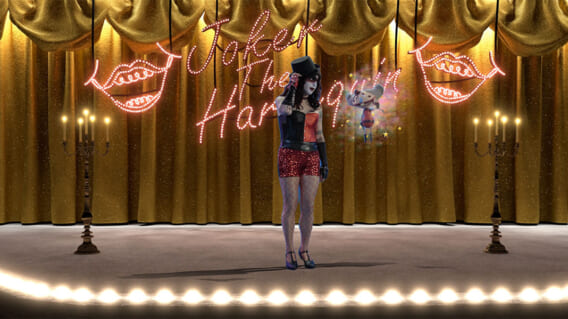 Are you sick of the superhero cinematic cycle? Craving more nuanced trans representation across all genres? Then you’re going to love The People’s Joker, an unreal and unauthorized experiment in queering established IP written by Vera Drew and Bri LeRose.

The People’s Joker twists the basic plot of Todd Phillips’s 2019 Joker film (lost and lonely Gotham City resident tries to make it in comedy while battling inner demons) into a moving allegory for the trans experience and coming into your own as a queer creator. Directed, edited, and starring Drew, it is truly unlike any comic book “adaptation” you’ve ever seen, dismantling heteronormative hero worship at every turn.

Ahead of its big debut as part of TIFF’s Midnight Madness program, Drew and LeRose talked to Dread Central about the films that inspired them to make this mind-blowing (and musical!) mashup, the B-movie beauty of Joel Schumacher’s Batman films, and the horror-themed People’s Joker sequel already in the works.