In case you really want to feel sad. 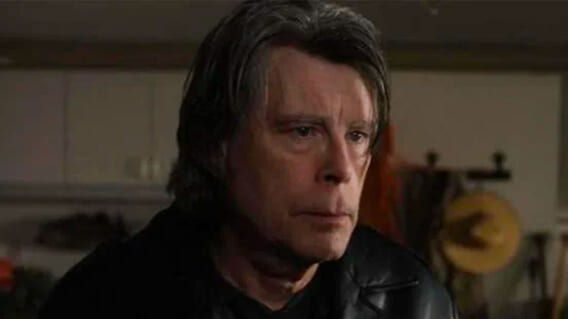 I’d ask how everyone is doing, but I think I already know. Some people deal with their feelings by retreating into happier worlds. Then, there are people like me and many other horror fans who dig into the darkest, most nihilistic movies we can find. There are films like Martyrs and Eden Lake that are the cinematic equivalent of getting run over by a truck. Then there’s The Mist, adapted from a Stephen King novella. It’s not just like getting hit by a truck. It’s like getting your heart ripped out and fed to you by King himself. And lucky us, it’s now streaming on Netflix.

The Mist takes place in a small coastal town in Maine after a massive storm rips through. While the townspeople try to start cleaning up after the disaster and run to the grocery store for supplies, a strange fog rolls in. And in that fog lurks a dearth of interdimensional creatures that are ready to rip apart human flesh. David Drayton (Thomas Jane) and his son take shelter in a grocery store along with other townsfolk. This includes religious zealot Mrs. Carmody (Marcia Gay Harden) who sees this fog as a punishment from God himself.

The longer they spend in the store, the more divided the people become. Mrs. Carmody demands a human sacrifice. David tries to find a way to escape. Chaos erupts, creatures invade the store, and everything just devolves into bloody hell. Then, of course, there’s THAT ending. It’s an ending that says, “you don’t deserve happiness.”

Perhaps almost as shocking as the ending itself is that Stephen King didn’t write that ending in his original story. In the short story, the survivors merely drive into the mist with King leaving it open-ended. But, of the film’s ending, King said he wished he had thought of it. He said to Yahoo! Entertainment in 2017:

When Frank [Darabont] was interested in The Mist, one of the things that he insisted on was that it would have some kind of an ending, which the story doesn’t have; it just sort of peters off into nothing, where these people are stuck in the mist, and they’re out of gas, and the monsters are around, and you don’t know what’s going to happen next. When Frank said that he wanted to do the ending that he was going to do, I was totally down with that. I thought that was terrific. And it was so anti-Hollywood — anti-everything, really! It was nihilistic. I liked that. So I said you go ahead and do it.

Spoilers ahead if you haven’t seen the film, but The Mist ends with David killing three survivors and his son in the car, with the intent to kill himself. But, he doesn’t have enough bullets for all of them. He cries in despair, only to see that the military was just seconds behind him, clearing out the monsters and searching for survivors. Jane falling to his knees and screaming in the middle of the road brings tears to my eyes just thinking about it.

So, with an endorsement from the master Stephen King himself, The Mist is a must-watch for all your nihilistic horror lovers out there. Thanks to Netflix you can watch it not once, but multiple times!

Are you going to check out The Mist ASAP now that it’s on Netflix? Do you like the original short story by Stephen King? Let me know on Twitter @mbmcandrews!