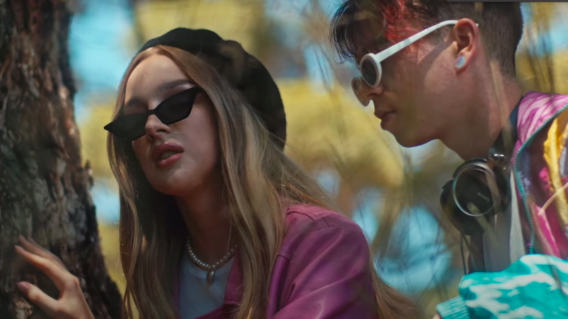 Australian director Alice Maio Mackay is 17 years old and is already making a splash in the horror world. Mackay, already an award-winning trans filmmaker, has wowed audiences with her short films and her artistic vision. She’s not afraid to make her films as queer as possible and it’s beautiful to see. Her feature film debut So Vam is streaming now, with her second film not far behind.

Read the full synopsis for So Vam below:

Kurt is an outcast in a conservative town who dreams of moving to the city to be a famous drag queen. When he is kidnapped by a predatory old vampire and killed, he is rescued just in time to be resurrected by a gang of rebellious vampires who feed on bigots and abusers.

In our exclusive look at So Vam, vampire April shows the newly turned Kurt who they hunt for blood. Their prey: abusers, homophobes, and transphobes who force queer people into the closet. So, naturally, a conversion camp is their hunting ground.

MacKay’s first feature film is unabashedly queer as Kurt finds his new family as he navigates being a vampire and trying to break into the world of drag. So Vam is a beacon of hope in the horror filmmaking landscape, a stunning example of how genre filmmaking can be gross, scary, and gay all in one.

Mackay is currently working on her next feature film, a queer slasher titled Bad Girl Boogey.

So Vam is available now on digital and VOD.