It’s Slasher vs. Cryptid In ‘Voorhees: Night of the Beast’

It's Jason Voorhees versus Bigfoot in the showdown of the century. 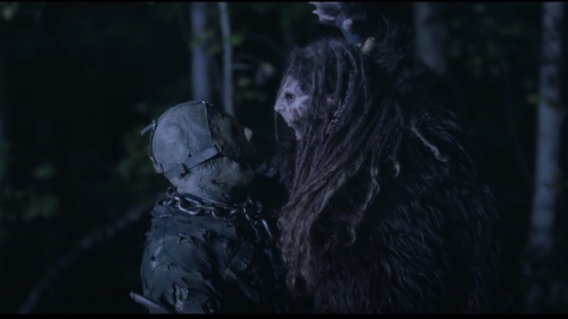 I remember when I was a kid, filled with the very same authorial ambitions as I am today, typing up a story that’s still living in my mind rent-free, though the physical copy has been lost to time. A little fan-fiction crossover between two of my favorite franchises from my youth, two series that helped mold my taste in fiction to what it is now — Blood Feud: Jason vs. Pumpkinhead! Jason Voorhees, the Crystal Lake Slasher duking it out with the Demon of Vengeance was something lil’ Giallo always wanted. So I made it happen. Unfortunately, I wasn’t able to create it in any official capacity because despite how much of an absolute banger it was (with guns and chainsaws!), the chance of any studio taking movie advice from a ten-year-old was a little less than zero at the time. In any case, it’s something that stuck with me, and I still find myself thinking about it every so often… there’s a point to all this, I promise.

Said point being that I wasn’t the only one that found creating potential Friday the 13th crossovers to be a fun use of time. Far from it, actually! I remember there was a website that had a whole page dedicated to crossover ideas with our favorite hockey mask-wearing camp mascot: Jason vs. Michael Myers, Jason vs. Pinhead, Jason vs. Puppet Master, Jason vs. Aliens, Spaceballs the Flamethrower. So many fun ideas, several of them I wanted to see (especially that Puppet Master one). But not all of these storytellers stopped at a small synopsis or short story about their Voorhees battle-royale wishes… some actually filmed them! Hell, just off the top of my head, I remember one about Jason fighting Sarah Connor, several where Jason fought Michael Myers (that’s a popular one), and even one where Jason fought Batman… yeah, I know, I’m not sure how to feel about that either, but it exists!

However, through all these various matches, there was one that fits so well, yet I’ve never seen anyone take a crack at it until this moment… Jason vs. Bigfoot. Luckily for us, Jason Pitts not only thought of this prospect, but also went out of his way to make it a reality with his Friday the 13th fan film titled: Voorhees: Night of the Beast!

Of the film’s story, Pitts said:

“Mark is dealing with PTSD from an encounter with Jason from his childhood. Crissy and his friends decide they want to try to help him get over his fear. At the same time, a group of Bigfoot hunters enter the forest in search of their prey. One of these is a young Creighton Duke. The two story lines collide and lead to an epic showdown between Jason and Bigfoot, while telling an origin story for Creighton Duke.”

There’s a lot to unpack here, so I’m just going to give y’all a quick rundown of the main points of interest in the flick. First up, the big one: this is the backstory of the fan-favorite character from Jason Goes To Hell: The Final Friday, Creighton Duke. He’s the badass bounty hunter who wants to send Jason Voorhees to… well, hell. It’s nice to see him get some love, because I feel he was vastly underutilized in his original debut. Honestly, they should’ve just made him the protagonist, it would’ve helped Final Friday out immensely. But yes, we finally get some context as to why he has it out for the Camp Forest Green Killer. Even if it’s not official, it’s still something!

Speaking of callbacks, the film’s main character, Mark, is one of the kids that attended the camp in Friday the 13th Part VI: Jason Lives. There’s actually a lot of love thrown Part VI’s way, making it feel very much like a continuation of that plot more than anything. Which isn’t at all to its detriment. In fact, there’s plenty of references and easter eggs to other entries in the franchise, giving the flick some connective tissue that makes it feel that much more authentic.

Pitts even created some new lore for Jason, explaining why he is what he is through ancient lust demons, a certain special book, and a bit more that I won’t spoil. All-in-all, it’s a novel way to explain Jason’s existence.

I can’t shake the feeling there’s something else I’m forgetting… oh yeah, Jason has a full-on brawl with Bigfoot. I’m sure I could give more detail, but I feel that would be unnecessary.

Seriously, they just kick the shit out of each other, which is the main selling point of the movie because why wouldn’t it be? It’s fun to see despite only taking a small bit of the runtime, but it is what it is.

It should be noted that this flick was made with a $15,000 budget, so it helps to view it through the appropriate lens while watching. That being said, I’d say it’s pretty impressive what they were able to accomplish with such a small budget! You can tell Pitts and his crew are truly fans of the franchise, having done their best to bring some new attractions to Camp Blood. If you ask me, their efforts were not wasted.

Check out Voorhees: Night of the Beast here or watch it down below!