'The Flock' is an upcoming found footage project all about demons, cults, and conspiracy. 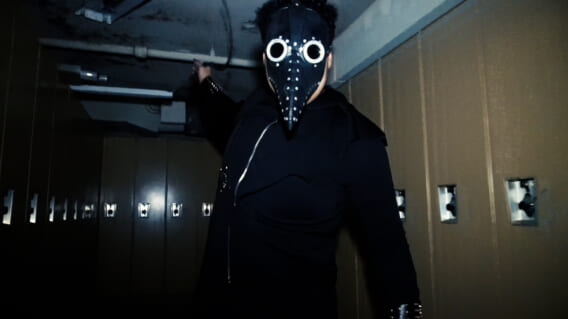 Moloch – a Canaanite deity often paired with the age-old pastime of child sacrifice and known for being particularly spited by God (according to the Hebrew Bible). Not to be confused with mollusks, which are smart spineless soft bois that may have been around longer than dinosaurs, which is potentially horrific in its own way depending on who you are. Now, I could deep dive into the biblical details and risk turning this into a religious studies course, but I’ll keep it brief, so this doesn’t feel like a homework assignment.

Long story short, there was an ancient cult that worshipped Moloch by boiling children alive in the bowels of a “big, bronze statue with the body of a man and the head of a bull”… if that sounds familiar, it’s probably because the Greeks fancied a similar idea at one point, allegedly. They just used it for criminal executions, though, not kid-killing rituals… which I guess is better? Anyhow, the “Cult of Moloch” used such practices in an attempt to bring prosperity to their fertility and land, because of course they did. Why wouldn’t they? Sacrifice seems to be the first step to any successful harvest from what I’ve seen.

The accuracy of the info I just exposited has been contested for decades, but that’s a non-issue because we’re not here to discuss whether Moloch was an actual deity, a form of sacrifice, or an adorable spikey lizard. No, we’re here to segue into a film that’s recently been brought to my attention, one packed with many things I love – Horror! Action! Monsters! Found foota-… wait, another found footage flick? Y’all are starting to make me look like a fan of the sub-genre or something, I swear… back to point, Dillon Brown made a film answering a simple question that I’m sure everyone’s asked at some point: what would happen if a cult tried to summoned Moloch into our world? Answer – a lot of blood and spent brass.

Welcome to… The Flock.

“A mysterious cult, calling themselves ‘The Flock’, has set up camp somewhere in Northern Nevada, leaving behind a trail of missing people and bizarre online recruitment videos encouraging the worship of the demon, ‘Moloch’. A trio of true believers embark on a road trip to locate the cult and warn them of the dangers of demonic worship, but hot on their trail is another group: mercenaries hired by the Church and armed to the teeth, with a personal mission of their own…”

The whole film was done under $4000, though if you ask me, the budget looks way higher than that! Brown said of the film:

“I’m still not quite sure how, but we stretched every penny to try and make the film feel like it was done with a lot more; most of that is thanks to my amazing cast and crew who stepped up in so many ways… it was a true group effort from a really great army of artists… The film was actually shot on weekends, starting in October of 2021… wrapping in March of this year. We were true ‘weekend warriors’… as everyone had careers and families… there were times when I’d come home from work, meet a group of actors on my block before I even ate dinner, and go shoot a scene so we could chip away at the script.”

During my watch, I never got the impression that the flick was filmed primarily on weekends over however many months. It’s tight, concise, feeling very much that it was produced over a set schedule, which is a testament to the amount of passion and craft put into the film. Brown describes The Flock as the Evil Dead 2 to his The Evil Dead, as it’s a more realized vision than his first film, The Devil’s Children.

“The Devil’s Children… despite it… finding some success on Tubi and other streaming services, was never the film I intended to make. So doing The Flock allowed me to fully realize the idea I just couldn’t pull off at the time… It was a lack of time and funds but… to be honest… it was mostly a lack of confidence in myself. But that all changed with this film, and I’m so happy with the final product.”

The Flock attempts to capture the feel of the straight-to-video action/horror flicks that used to populate video rental stores everywhere, which unsurprisingly speaks to me personally. For the most part, I feel it succeeds in that intention!

“This is my ode to B-movies of the VHS era; those… romps that my parents allowed me to rent from the video stores as a kid, and that I just devoured throughout my teen years,” said Brown. “I really wanted to have these machismo action characters… with almost theatrical dialogue, and these overly serious protagonists, and a full man-in-a-rubber-suit creature, free of CGI.”

Did I mention the movie takes place in the same world as two other films I’ve talked about – The Wendigo and Mothman? That’s right, just sweetening the pot for y’all… or rather hollowed out, heated, bronze bull statue. Whatever rocks your boat. Point being, as I’ve said before: what a fucked shared universe, right?

There’s no set release date yet. But Brown’s currently shopping around for a distributor, planning to get it on streaming services by the end of the year. In the meantime, he’s going to manufacture DVDs and Blu Rays of the flick, so expect to see those sooner rather than later. As always, I’ll keep you posted!

“My hope is that the film is just a fun time, and that people will enjoy it for what it is: a filmmaker’s passion and energy for the craft dumped into every scene,” said Brown

I think that’s a pretty safe bet. Looking forward to the Moloch vs. Wendigo vs. Mothman crossover!