MC Hammer to the head. 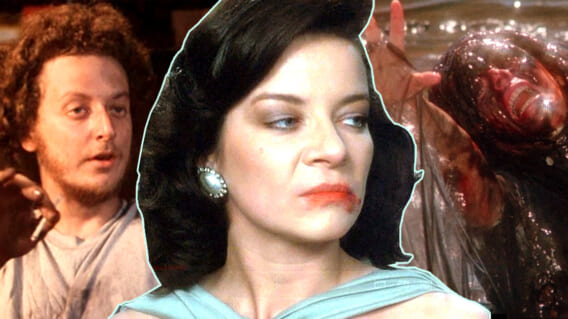 Horror fans seem to be extra polarized and partisan these days. From opinions on the recent Texas Chainsaw Massacre to Halloween Kills, it seems like the community is seriously on edge. That said, there is one topic I find many of us horror lovers can agree on, and that’s 1980s horror. When its comes to outrageous genre mayhem, the 1980s just can’t be beat. From the slasher craze to the emergence of extreme body horror, the 1980s truly had it going on. So in honor of the greatest decade of the grotesque, I’ve decided to rank its ten absolute best horror titles available to stream this May on Amazon’s Prime Video.

When it comes to retro horror titles streaming on Prime, nothing defeats the original two Hellraiser chapters. The first film hails from Clive Barker and is based on his very own novella “The Hellbound Heart”. There’s a creative cohesion present with this first film that’s a treat to behold: a totally streamlined vision of complete gutsy madness. Released in 1987, Hellraiser concerns a mysterious puzzle box that summons some very nasty sadomaschisitc demons from the realms of dry ice and disheveled soundstages. It’s scary, it’s queer, and it features one of the most iconic human villains in horror history: Julia Cotton as played by Clare Higgins.

And speaking of iconic villains in 1980s horror movies, do any of the classic icons even come close to outperforming that pool of slick, black oil out for blood in Creepshow 2? While this sequel doesn’t come close to capturing the 1950s comic book era macabre of the first entry, it’s still got one hell of a secret weapon: The Raft. The second segment in Creepshow 2, The Raft is based on one of the scariest Stephen King short stories ever published. And the film version is nothing to sniff at either. It concerns a group of dumb teens stranded on a raft, but twist, there’s a monstrous oil slick looking to devour them from below. The carnage in this segment is gross enough to wig out even the most seasoned horror fans. 10/10.

Here are the ten best horror movies from the 1980s on Prime Video:

Another inescapable title from the aforementioned list of Prime Video 1980s standouts is New Year’s Evil. This 1980 slasher from filmmaker Emmett Alston concerns a punk LA show host who receives a series of menacing phone calls during her televised New Year’s Eve bash. The killer warns of the murders he’s committing whenever a new time zone reaches New Year. Huh? No matter, this is a perennial revisit for anyone who enjoys bizarre 1980s slasher mayhem.

Lastly, what say you? Which of the above 1980s titles are you going to make some time for this May? Better yet, have I missed anything? Make sure to let me know over on Twitter via @joshkorngut. I’m always around to chat all things 80s horror!
.