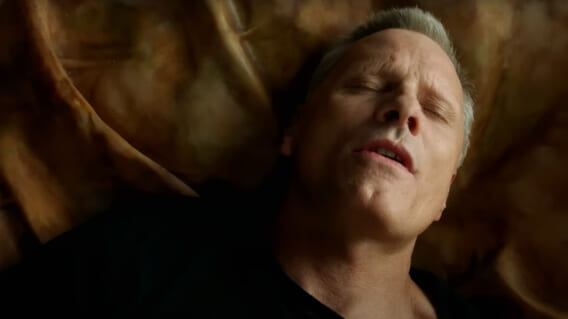 The undisputed grandaddy of the grotesque is back with his Cannes Official Selection Crimes of the Future. And today the full blown trailer for the David Cronenberg (dir. The Fly, The Dead Zone) joint has been unleashed by bad boy distributor NEON. The wildly disturbing new action featured in the promo further confirms the flick to be a mind-melting return to body horror for the legendary Canadian director.

I’m psyched as hell to set my sights on the latest Cronenberg freak show this June when Crimes of the Future arrives exclusively in theaters. The messed up and disturbing full length trailer for the film is stacked full of strange and gut-wrenching imagery, so make sure to watch it below.

Neon states that the movie is rated R for “strong disturbing violent content and grisly images, graphic nudity, and some language.” AKA she’s real nasty. Crimes of the Future will open in U.S. theaters on June 3.

In Crimes of the Future…

“As the human species adapts to a synthetic environment, the body undergoes new transformations and mutations. With his partner Caprice (Léa Seydoux), Saul Tenser (Viggo Mortensen), celebrity performance artist, publicly showcases the metamorphosis of his organs in avant-garde performances. Timlin (Kristen Stewart), an investigator from the National Organ Registry, obsessively tracks their movements, which is when a mysterious group is revealed… Their mission – to use Saul’s notoriety to shed light on the next phase of human evolution.”

Watch the trailer for Crimes of the Future here:

Lastly, what do you think of the trailer for David Cronenberg’s Crimes of the Future? Are you excited for the filmmaker to return to body horror? Let me know on Twitter via @joshkorngut. I’m always around to chat all things Cronenberg!