This cult classic is bursting back into the horror scene! 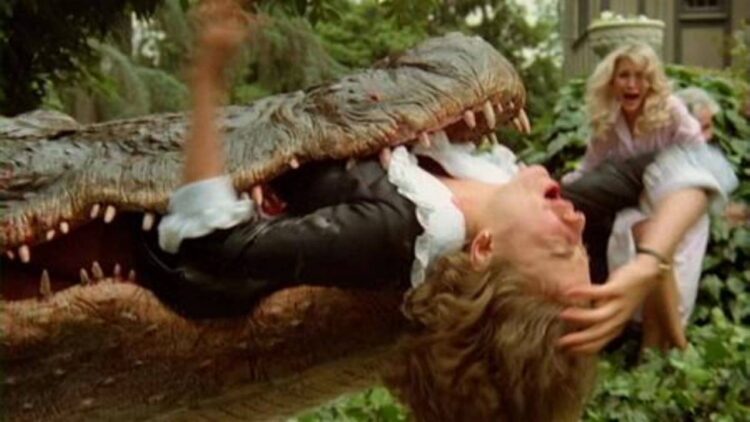 Director Lewis Teague’s Alligator takes the urban legend of a gator in the sewers and makes it even more horrifying. This alligator bursts into a wedding, devours sewer workers, and so much more. Now, Scream Factory is giving this cult classic the collector’s edition it so deserves.

Alligator begins when a family returning from Florida decides their pet baby alligator is too much to handle. So, they flush him down the toilet. Meanwhile, Slade Laboratories is conducting secret experiments with animals and disposing of them in the sewer. The alligator, fending for itself, begins to feed on the dead animals, and grows. Now, twelve years later, after several mysterious murders, David Madison (Robert Forster) is on the case to find out who—or what—is killing people.

Directed by Teague (Cujo) and written by John Sayles (The Howling), this creature feature is wild from start to finish. Scream Factory is giving it the VIP treatment with a three-disc release that includes a 4K UHD and two Blu-rays. The UHD and first Blu-ray will both feature the original theatrical cut of Alligator. The additional Blu-ray disc will have the rare television version of the film with alternate scenes.

The release also includes an exclusive poster from the film, but no word on what that poster looks like yet. More special features and extras are yet to be announced, so keep an eye on Dread Central for updates! On Twitter, Scream Factory said that they’ve been putting this release together for almost three years, so we expect some rad features.

We’ve been working on this one for almost three years and thrilled to see it “break out” soon!

Scream Factory is also releasing Alligator II: The Mutation on Blu-ray for the first time in North America. Both will release on Feb 22, 2022. Preorder now on Scream Factory’s website.