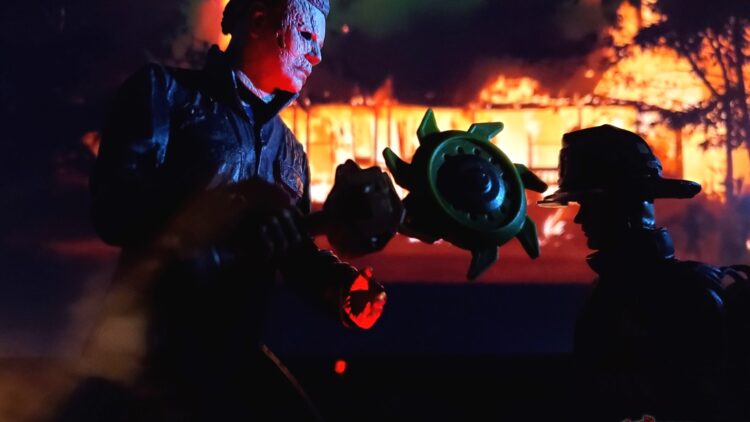 The high holy spooky days are upon us, and as the leaves fall from the trees and the air grasps a chill, so comes Halloween Kills.

The Shape has now hit theaters across the US, and following close behind will be NECA’s Ultimate Michael Myers action figure! He’s a little crispy, missing some digits, and didn’t fare so well in his last toe-to-toe against Laurie Strode, but none of this has slowed him down one bit…

This screen-accurate Michael Myers action figure stands in 7″ scale and comes with knives, bat, bulb, skull mask, Halligan bar and interchangeable head and hands… and he’ll need it all when the Strode women set out to end his evil reign of terror.

The gorgeous figure comes in a collector-friendly window box packaging with an opening front panel.

Big Thanks to NECA for access to their newest Michael Myers action figure!

David Gordon Green, Danny McBride, and Scott Teems wrote the screenplay for Halloween Kills, in theatres and streaming on Peacock.

Will you be picking up your ultimate Halloween Kills era Michael Myers figure? Lastly, how are you going to be watching Halloween Kills? In theatres or via your shiny new Peacock subscription? Let us know in the comments below or on Facebook, Twitter, or Instagram! Dread Central is now on Google News!