Check out Ethan Hawke as a serial killer in the terrifying one-sheet for 'The Black Phone' ...if you dare... 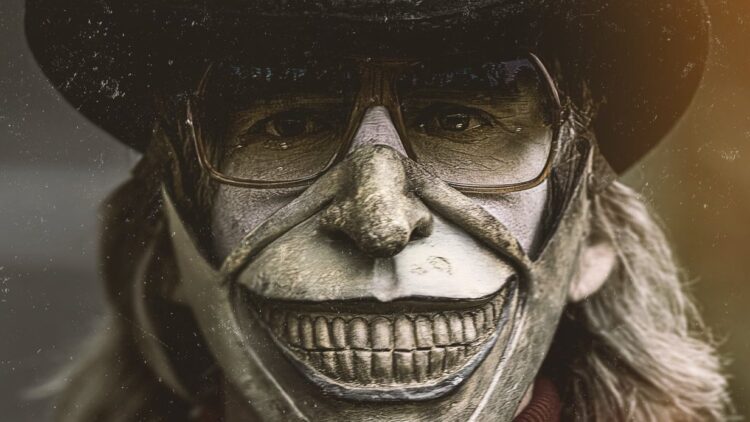 Filmmaker Scott Derrickson (Sinister, Doctor Strange) has just dropped the one-sheet for The Black Phone on Twitter, and honestly, I wasn’t ready.

The terrifying poster for Blumhouse’s upcoming feature showcases star Ethan Hawke in a ghoulish mask reminiscent of Lon Chaney in London After Midnight. Please make it stop. The poster drop comes ahead of tonight’s World Premiere at Fantastic Fest. It delivers one hell of a first impression.

The Black Phone is based on a 2004 story by author and national treasure Joe Hill that features a young boy abducted by a brutal murderer. While trapped in the maniac’s cellar, the boy uncovers a disconnected black phone which seems to be able to forecast the voices of the murderer’s previous victims.

The Black Phone is a chilling story. If properly adapted, it could be one of Blumhouses’ scariest features ever produced. Jason Blum spoke with Collider about the project in June, calling it “one of the creepiest movies” he’s ever made. We’re taking this with a grain of salt,  but considering the horrifying source material, there’s a chance this is true.

This isn’t the first time Ethan Hawke has tapped into the horror genre with Blumhouse. He appeared in The Purge and Scott Derrickson’s shocking hit Sinister. Both of these titles have gone on to become franchises.

The Black Phone has its world premiere tonight at Fantastic Fest and heads to Beyond Fest next month. The film then goes to theaters on January 28th, 2022.

Lastly, what did you think of the poster for The Black Phone? Let me know on Twitter via @joshkorngut. I’m always down to talk about anything Joe Hill-related (including his dad Stephen King).