A Ritual Begins in Our Exclusive Clip from ‘Seance’

Before it hits Shudder on Wednesday, watch this exclusive clip from Simon Barrett's directorial debut exclusively on Dread Central. 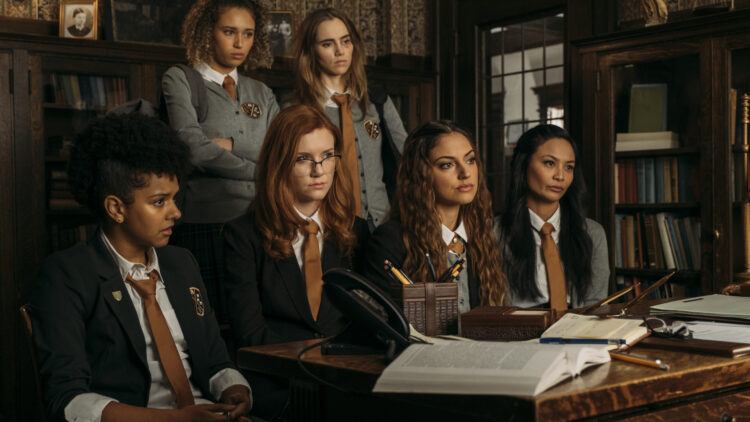 Shudder will premiere Simon Barrett’s Seance this week. The film will be available exclusively to stream on the platform starting on Wednesday, September 29. Shudder will be the only subscription service to carry the film in the U.S., Canada, the United Kingdom, Ireland, Australia and New Zealand.

In his three-and-a-half star review for Dread Central, Drew Tinnin praised the film’s “supercharged, undeniably crowd-pleasing finale,” promising that “[t]he most ardent of horror fans will not be disappointed by the ending.”

Today, Dread Central is thrilled to exclusively share a clip from Seance.

Below are the official synopsis and trailer for Seance:

“In Seance, Camille Meadows is the new girl at the prestigious Edelvine Academy for Girls. Soon after her arrival, six girls invite her to join them in a late-night ritual, calling forth the spirit of a dead former student who reportedly haunts their halls. But before morning, one of the girls is dead, leaving the others wondering what they may have awakened.“

Known for writing some of the most revered horror films over the past decade, Barrett (You’re Next, The Guest) wrote the screenplay, and Seance marks his feature directorial debut. The movie stars Suki Waterhouse (Assassination Nation, The Divergent Series: Insurgent), Madisen Beaty (Once Upon a Time… In Hollywood, The Curious Case of Benjamin Button), Ella-Rae Smith (Into the Badlands, Fast & Furious Presents: Hobbs & Shaw), Inanna Sarkis (Boo 2! A Madea Halloween, After Franchise),  Seamus Patterson (Channel Zero) and Marina Stephenson-Kerr (Channel Zero).

Are you a Shudder subscriber? Are you excited to check out Seance on September 29th? Let us know in the comments below or on Facebook, Twitter, or Instagram! You can also carry on the convo with me personally on Twitter @josh_millican. Dread Central is now on Google News!