Why the Car in ‘Titane’ Had to Be a Lowrider 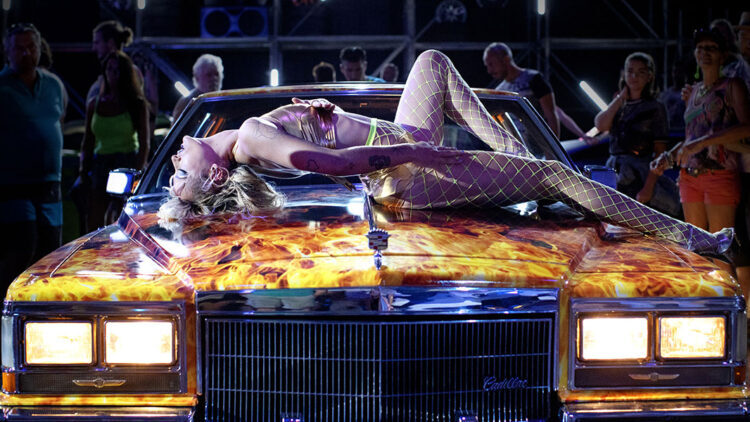 Last night at Fantastic Fest, director Julia Ducournau joined a rowdy crowd at Alamo Drafthouse South Lamar for a Q&A following the U.S. premiere of Titane. She was given “veto power”—to be invoked if any of the audience’s questions sucked—but she was keen to answer one fan’s question about the car in the movie.

“Could you talk about how you cast the car that would be the father of the baby?,” the attendee asked, as others in the room laughed and nodded, eager to hear her reply.

You heard that right: In Titane, a car helps conceive a child, giving the term “autoerotic” a whole new meaning. As has been revealed in a number of reviews, the film’s central character, Alexia (Agathe Rousselle), is impregnated by a car she has sex with. You can see, then, why Ducournau’s “casting” of that car was as important as her casting of the film’s human characters.

“The first thing I want to say is that for me, the car is feminine,” Ducournau said. “So, how we casted it… well, it had to be a lowrider, obviously.”

That Alexia could be impregnated by a “feminine” car is consistent with Ducournau’s ideas about gender and sexuality. In an interview with Vulture earlier this year, she said that she wanted the film to blur the lines between the two.

Also Read: TIFF Review — Titane is a Bold and Beautiful Genre-Bender with a Heavy Metal Heart

The car’s distinct design also needed to foreshadow a pivotal moment in the story. Ducournau explains that the vintage Cadillac she cast was originally gold, “which was cool—but not right for the film. So, my set decoration team and I covered it with these big stickers of photorealistic flames. I decided to do this so we could anticipate what we see in a scene set at the fire station later in the film.”

Ducournau says that the car in Titane also helped tie her fascination with Greek mythology into the film.

“In Greek mythology, the gods Uranus and Gaea represent the sky and the Earth,” she explains. “These two gods gave birth to the titans. And that’s the birth of the new humanity—a humanity that’s monstrous, yes, but strong. Part of the mythology of Titane is that metal and fire intertwine. So, the flames on the car were incredibly important to show Alexia’s fusion with it.”

“There are other hidden meanings to it that I don’t have time to talk about,” Ducournau added, coyly. As more horror fans continue to see her wild new film for themselves, perhaps we’ll have a better idea about what those meanings might be.

Titane had its U.S. premiere on opening night at Fantastic Fest 2021. Fantastic Fest runs September 23-30, 2021. For showtimes and more information, visit its website.