The iconic horror hosts tell us all about the workplace drama of 'The Boulet Brothers’ Dragula,' their hypothetical reboot of 'Black Sunday,' and more. 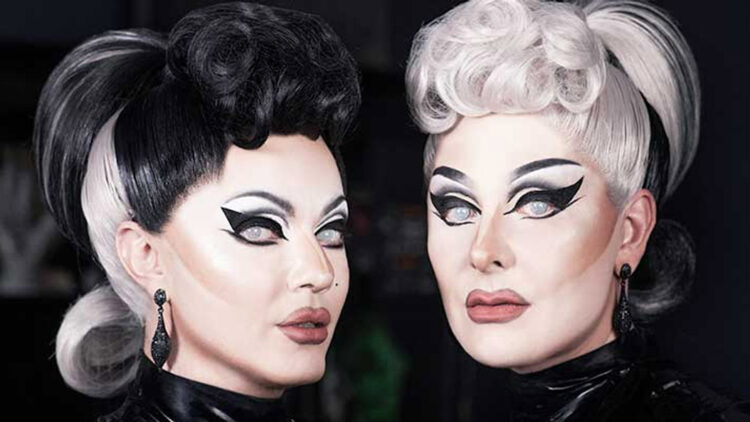 Fresh off the premiere of their fourth season on Shudder, Dread Central sat down with the horror hosts to talk about their biggest and scariest season of The Boulet Brothers’ Dragula yet.

The new season of the groundbreaking Shudder original series features 10 diverse drag artists from around the world, and it’s already as terrifying as it is groundbreaking. This year, the competing drag monsters are all up for the $100,000 grand prize. To date, that’s the largest prize in the show’s history.

What are their thoughts on Halloween Kills, or Hellraiser: Hellworld? Which legacy franchise would they reboot if given the chance? They tell us all that and more right here…

Dread Central: Congrats on the season four premiere. How does it feel?

Dracmorda: It feels exciting. It’s been a long process, so we’re very excited to birth baby.

Swanthula: Yeah, I’ve got to say it’s kind of like a combustive mix of anxiety and excitement.

DC: Season four looks bigger and scarier than some of the previous seasons. So, I was wondering, do you have a favorite fourth film in a legacy horror movie franchise?

Drac: For me, it’s Halloween 4. You can see it referenced in the third season of the show. In the opener we kind of pay homage to the scene where Michael Myers is getting transferred in the ambulance. There’s something about it that I think was really interesting.

It was the first Halloween that they did without Jamie Lee Curtis—you know, of the ones with Michael Myers was in, obviously. The legacy of passing that scream queen status down to Danielle Harris. There’s something kind of magic about that movie.

Swan: Yeah, no, I’m totally with you. There’s a lot of really interesting kind of camera work. It’s scary and I think it’s sort of Michael Myers at his maybe scariest best—I don’t know if I can say that. But, we did a rewatch recently and you know, it holds up.

DC: So, not Leprechaun in Space fans?

DC: It seems to me like the workroom drama is back this season, with a bit of a vengeance. Would you say that’s true or false?

Drac: I would definitely say that is true. I have an interesting anecdote about that. Obviously, we always encourage the competitors to air their grievances on air and to work through their problems so that we see what their real reality is. We don’t try to make them cause drama, but we try to make them talk about the drama they have. But this was the first year we have ever had to ask them to tone it down. I mean, we had to interject! Imagine: You know how reality shows are, the more dramatic the better, but this was the first year we were like, “This has to stop, this is getting scary.” We had to sort of have an intervention.

Drac: I want to kind of back up the question and say that we’re not actually expanding it. We’re kind of celebrating what it has always been. The truth is there have always been drag kings, non-binary drag performers, and absolutely trans people performing since the beginning of drag. So, it’s sort of a tradition that we’re just reminding people has always been there.

DC: After winning Resurrection, do you think that Saint has a bit of a leg up on the competition?

Swan: She actually addresses this in the first episode, and if not, you’ll definitely see it in one of her interview moments. I think what she says is pretty accurate: It’s not necessarily a leg up in that her drag is better than someone else’s, or that getting put through the Dragula school has better prepared her. It’s her state of mind. She understands the mental stress, and how much of a whirlwind and how demanding it is to be a competitor on the show. Saint understands going in that that is part of it. And I think for the other nine competitors going in, they are just tasting it for the first time. So, it’s just a little added pressure for them to deal with mentally.

Drac: Maybe that would be the advantage that Saint has, just knowing what to expect.

DC: The Boulet Brothers’ Dragula is filthy and disgusting. How do you come up with, and produce your extermination sequences?

Swan: Well, Drac and I have a long list of ways that we would just love to torture people…

DC: Which horror villain, old or new, do you think would slay the The Boulet Brothers’ Dragula competition if given the shot?

Swan: I’m gonna say Julia from Hellraiser. That’s a bitch who will cut you on her way to the crown.

Drac: (Laughing) Julia would be great in the workroom.

DC: I’d be worried she wouldn’t want to compete. She would come for the hosting gig.

Swan: Truly. No, she would try to snatch my wig. And then she’d have to really die.

DC: Have you ever seen Hellraiser: Hellworld, the one with the internet rave? It’s absolutely horrible, of course, but I highly recommend it.

Swan: I have a relationship like that with like Underworld movies. I just did a re-watch because we’ve been flying to gigs lately. We just got back from Salt Lake City and it was a two-hour flight, so I watched the Rise of the Lycans on the way there and I watched the original Underworld on the way back. They’re so cheesy, but I love them.

DC: The Boulet Brothers’ Los Angeles Halloween Ball is coming back up on October 30. How does this year’s event stack up against previous editions?

Drac: It’s our 20th annual Los Angeles Halloween ball. Every year it just gets bigger and bigger. This one, if I’m not mistaken, is sold out already. It’s an experience unlike any other nightclub because it’s something we’re passionate about. We basically mix a gigantic, three-level club into a haunted house. There are mazes and games and different levels. And it’s just an incredible experience.

Swan: I think you can tell when you when you come through the doors that the ball is created by people who love Halloween. There are a million things that we do not have to do, but we love to do… So, when you come and you want to see a demonic puppet show, or you want to go trick or treating in the club, or carve a pumpkin, or do a seance… you can do all of these things because it’s part of the holiday and we just love to celebrate the holiday.

DC: I find all horror fans, or many horror fans, have those movies that really fucked them up as children. And I’m wondering if you guys have something like that to share.

Swan: I mean, The Exorcist really got me, gal. It got me good. When I was a child it was one of those movies that just got into my skin and I couldn’t get rid of it. I couldn’t sleep, it terrified me.

DC: Are you excited about the David Gordon Green trilogy?

Swan: I remembered that The Exorcist was getting a reboot, but I didn’t know that it was a trilogy.

Drac: They’re spending an insane amount of money on it.

DC: Seems like a safe bet to me especially, after his success with Halloween.

Swan: Have you seen Halloween Kills?

DC: I have. Thoughts on Halloween Kills?

Drac: I love what they did with the 2018 Halloween reboot—and I am the Halloween fan. I’m open to different interpretations, as long as they’re not Rob Zombie’s. But, I think that they took a really weird turn with this one. I was so excited for this to come out and that Kyle Richards was coming back. I couldn’t wait to see what they did with her, and now we all know it was very little to nothing. Maybe she was a terrible actress, and they were just like, ‘Oh my God, we have to like, figure out how to edit her out.’

Swan: She wasn’t bad, though…

Drac: She didn’t do anything! She gets more scared on Housewives when they fight. We’ll see what happens. I feel like maybe they didn’t need to make it a trilogy. But maybe this was just the filler one. I don’t know.

DC: Why do you think queer people are so drawn to horror?

Drac: Horror is filled with queer subtext. From the beginning. lf you look back at The Old Dark House, for example, that’s from James Whale, who was a gay director…

Swan: …An out gay director at the time, which like, is really unheard of.

DC: With Scream around the corner, if the two of you could reboot a franchise for modern audiences, which would it be?

Drac: I think we always said it would be Hellraiser. But now that they’re sort of doing something new with that, probably not. I think we would probably go back to sort maybe an old forgotten movie, something like Black Sunday.

Swan: Yeah, it’s under-celebrated, and who knows, maybe there’s something there.

DC: Could you give me a quick logline?

Swan: It’s basically it’s about a witch’s curse and how it ripples through the bloodline. It’s satanic and has witchcraft. There’s a little bit of love, of course, but it’s pretty cool.

DC: Before I free you both, what can a new audience expect out of this upcoming season of The Boulet Brothers’ Dragula?

Swan: I like to say that each season has its own flavor, but I think season four mixes all of the best aspects of seasons one two and three. It has the punk DIY aesthetic of season one, the sort of fun and light irreverence of season two and the diversity and horror elements of season three like all wrapped up. and it is so exciting. People are going to love it.

Did you know the iconic Boulet Brothers also host a podcast right here on the Dread Podcast Network? Creatures of the Night moonlights as a variety show and features movie reviews, celebrity interviews, and more. Subscribe now!