The Slipknot frontman tells us his first horror screenplay has a title and will aim to use all-practical FX. 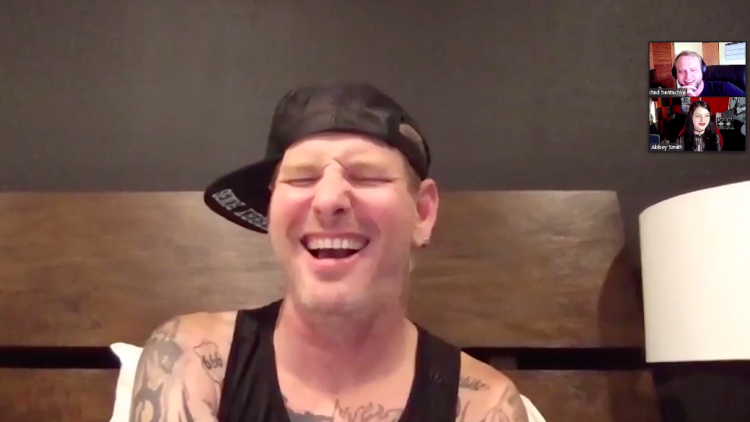 What can’t Corey Taylor do? He’s the frontman of the band Slipknot, he’s an actor in films such as Dread’s latest Bad Candy, he’s written comics books, and he’s served as producer on various horror projects. Now, Taylor is going to add screenwriter to his resume.

In an exclusive interview with Dread Central, Taylor revealed that one of his scripts is in pre-production. He said:

“I’m actually just about to break ground on my first real script. I’m hoping to shoot next year. It’s called Zombie Vs. Ninja. It’s exactly what I just said, it’s that. It’s going to be gonzo horror with a hint of comedy, but some real gore, some crazy effects, hopefully, all practical. We’ve got the director, we’ve got the effects, we’ve got the finances. Now, we just need to cast it and get it ready to go.”

Taylor couldn’t reveal who’s directing the film quite yet, but did say that the director “took the script in directions I didn’t even realize.” While the pandemic put a halt on production, there’s a silver lining as it gave them more time to really take their time and flesh out the story.

Also Read: New Clip From Bad Candy Is All Trick, No Treat

Writing has been a passion of Taylor’s for years. He explained that one of his biggest dreams has been to “create a movie, write it, and then see it from start to finish, from soup to nuts.” Zombie Vs. Ninja is not Taylor’s first script, but it’s the first one he’s actually moving forward with.

During the interview, Taylor also discussed his role as Chilly Billy in his latest film Bad Candy. He and Zach Galligan (Gremlins) play shock jock radio hosts who tell a twisted anthology of terrifying local myths that lead to a grim end for small-town residents.

Radio is familiar territory for Taylor, both in experience and in his own love for the medium. He pulled from shows such as Howard Stern and even drew from his time as a guest on the legendary radio show Coast to Coast. He said, “Playing Chilly Billy was natural for me.”

His relationship with Galligan made the job even easier. Taylor said:

“The back and forth between me and Zach was rad. We were busting each other’s balls the entire time we were filming. First of all, he’s one of the raddest dudes on the planet. It was so cool to be able to just hang I’ve done movies but I’m not an actor. But he makes it so easy to be relaxed with him. We walked through stuff together and were able to build this great relationship.”

Catch Taylor in Bad Candy, available now on streaming services and on Blu-ray.