‘The Eye’ At 20: An Elevator and A Lesson To Remember 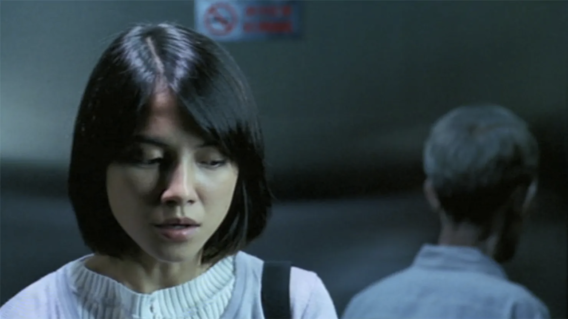 For years, a certain elevator etiquette has been a great self-defense technique for me. Should I be the first to board it, I beeline to one of the back corners. The next people who enter will have ample room, and the hovering old man I’ve long dreaded can’t appear. As his signature spot is occupied, he just can’t. I get to feel safe, and along with that call myself a rule-abiding elevator rider.

Such is the impact that brotherly filmmakers Oxide and Danny Pang’s The Eye (Gin gwai) had on me. Reportedly, the basis of the Singapore-Hong Kong horror hit—which turns 20 this year—was from the Pangs’ creative theorizing of an old news story. They were “filling in the blanks” of what might have happened to a girl who regained her eyesight and ultimately took her own life. The answer resides in the literal translation of The Eye’s original title, 見鬼 (“seeing ghosts”). It’s also the ability that our lead, young violinist Wong Kar Mun (Angelica Lee), unwittingly gains after a corneal transplant.

One of the more memorable ghosts that Mun sees is the elevator man (Sungwen Cummee). The ghost’s face is partially caved in and feet don’t meet the ground. Even with a name more akin to a descriptor, he is as recognizable as Michael Myers or Sadako. He’s just as capable of representing fear. Not only has he been placed in a memorable “no escape” setting for his set piece, but the elevator man is also armed with great buildup (present to Mun but not on CCTVs), terrific editing (each new frame amplified the threat while extending her elevator ride), and an unnerving logic to deduce (the longer it takes to the 15th floor, the closer he gets to her). At around two minutes in length, this scare has altered my view on riding elevators.

Thanks (?) to the existence of the 2008 remake, also called The Eye and also directed by duo filmmakers (David Moreau and Xavier Palud), I will always place this elevator scene beside the other. Usually to compare, and usually to deduce the new one is inferior. Despite replicating key beats to a T—the windup, the claustrophobia, all that jazz—it is notably filled with more sound. And the sonic overload, I’ve always believed, is why the new ride is lesser than the old one. It’s true even when the more popular—yet still within reason—choice is in the timing. If you keep track, Sydney Wells (Jessica Alba) is trapped with her elevator man (James Spencer) for only about one minute, instead of Mun’s two minutes.

Between The Eye’s two elevator sequences, 2008 is a case of diminishing returns from audio overdesign. Sydney smashing the buttons, muttering (via ADR) “It’s not real,” deep bass hits, the elevator man croaking, are cacophonous against 2002’s sparse but more gripping treatment. There, it’s primarily a dance between composer Orange Music’s drums and Mun’s staggered breaths. In the face of the supernatural, one side escalates while the other surrenders. In a sense, this is a subtler form of a western character’s need to shout “What do you want?!” into the air versus an eastern one’s readiness for the end. As much as there’s merit in interpreting that as submissive, it’s more correct, personally, to suggest the presence of (fear-tinged) respect for and awareness of forces beyond one’s conventional understanding.

Needless to say, the latter is what makes The Eye tick. It is what The Eye remake doesn’t get. It also arguably gets abandoned even more in the reshoots (without the original directors) aiming to increase the supernatural factor. Yes, the Pang Brothers’ film takes joy in scaring viewers. But in the end it wants us to accept that we are truly futile in some scenarios. There are philosophies behind the horror that Moreau and Palud’s film seems to refuse to tackle. It’s a move that expectedly renders it as one of the weaker Hollywoodized Asian horrors… or an example of an Asian horror completely Hollywoodized.

Which one does your eyes see, I wonder?