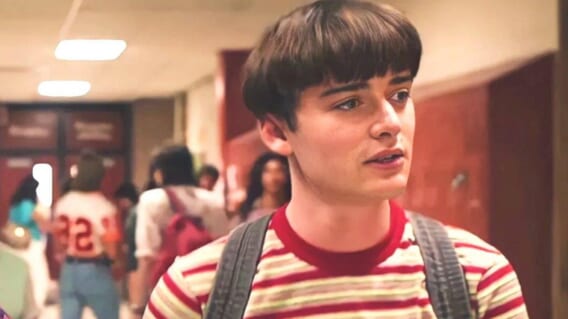 In an interview with Variety, Noah Schnapp, the actor who plays perennial Upside Down target Will Byers on Stranger Things, remarked, “I find that people do reach to put a label on him” in response to growing speculation the character might be gay. Other cast members chimed in, a veritable assemblage of dodgy answers and sanitized platitudes. Most of them amounted to the core of Will Byers as a character and tentpole of the young cast transcending sexuality entirely. It was met with confusion at best and ire at worst online, with many fans (rightfully) interrogating the resistance popular media still has with regard to queer characters. Sure, Buzz Lightyear’s teammate might be queer. But even in 2022, Buzz Lightyear himself never would be.

Unexpectedly, though, I feel inclined to not just defend Schnapp—not that he’s done anything wrong and bearing in mind he’s only 17—but see Will Byers as an ambiguous, gray man queer character. Certainly, popular media continues to grapple with queer characters, especially when they originate from non-queer creators. Too often, they’re inserted at the periphery to assuage audience expectations with little thought or care given to their narrative arcs or characterization.

The argument against is pat on its face. A good character is a good character, queer or not. Of course, that wildly devalues the sheer dearth of queer characters in popular media, even today. It often originates from persons—even those with the best intentions—whose identities have been mirrored for decades. It’s easy to expect little when media has given so much. Queer persons have rarely had that privilege.

Like other minority identities, those pieces of media are often relegated to subgenres of their own. Black cinema. Queer cinema. It’s not an unreasonable expectation to want those identities to feature front and center, without ambiguity or, as noted by the Stranger Things cast, the desire to exist without labels. It’s nice to say, at least in theory, but queer persons don’t exist without labels. Grocery shopping with a partner, posting online, and simply existing in any space as a visibly queer person is labeled. There’s no “It’s 2022 and labels are redundant” privilege for the lived-in experience of a queer person, the minutiae of transgressions and prejudice encountered daily.

This then brings us back to Stranger Things and Will Byers especially. Season three of the show featured a considerable shift in Will’s characterization. He slowly shifted away from the core group, a change at first grounded in his experience as a vessel for the Upside Down. Of course, his friends didn’t quite understand him; he’d endured trauma they’d only joined at the end. In Season one, Will was trapped while his friends cracked jokes and rode their bikes. They were looking for him, sure. But the extent of their trauma was marginal compared to Will’s imprisonment in a literal hellscape.

As season three developed, audiences—queer audiences especially—picked up on some not-so-subtle subtext. Will’s frustrations and growing pains didn’t just look like frustrations and growing pains. Instead, they distinctly resembled the internal process of burgeoning queer awareness. That is, Will was behaving exactly like so many young queer persons do as their identity takes hold. For young queer men, riffing with the boys is easy at first. It’s natural and comfortable. Then those boys start getting girlfriends. They’re spending less time together, and they’re talking about pretty girls, cool girls, and the girls they’d like to date. They’re chatting with them on the phone and awkwardly flirting with them in the school hallways.

For young queer men, the chasm grows. Suddenly, D&D becomes T&A. Even the most talented of thespians struggle to perform well, pantomiming the vagaries of adolescent hormones in a way that doesn’t’ immediately out them. It’s an alienating, isolating experience, and like Will Byers, the default response is to lash out. Smash an old fort or snap at innocuous comments. Push back against expanding social circles, desperate to cling to the easier days of basement hangouts and bike rides by the lake.

Season four Will Byers is that struggle incarnate. It’s the sole reason Will Byers’ sexuality, at least for me, doesn’t need explicit confirmation. The subtext is rich enough, and the development earnest enough, to work absent any explicit confirmation. Conflict would dissipate were Will to come out. Namely, that would leave the additional characters with two choices; accept or reject. Rejection wouldn’t work, and acceptance would resolve the conflict immediately, depriving queer audiences of the very real, very poignant, internal struggle of Will Byers, especially in the mid-1980s. A decade infamous for quite literally targeting queer persons, Will’s journey resonates, even if the creative rationale is tenuous at best.

Stranger Things has been hit-or-miss with representation writ large. Maya Hawke’s queer Robin Buckley is a standout, easily eclipsing the legacy cast with her season three introduction. But scene-to-scene, the show remains as homogenous as ever. It isn’t perfect, and audiences frustrated with Will’s characterization aren’t wrong. This isn’t a dispositive defense. Critics raise several valid points, especially apropos of the media’s inclination to reject labels when they really mean to maintain as broad an audience as possible, whether it’s right to do so or not. In the specific case of Will Byers, though, his being in the closet, free of a clear identity, reads as an earnest exploration of developing sexuality. Straight, gay, questioning or curious, Will’s arc lands.