All hail the queen, Maika Monroe. 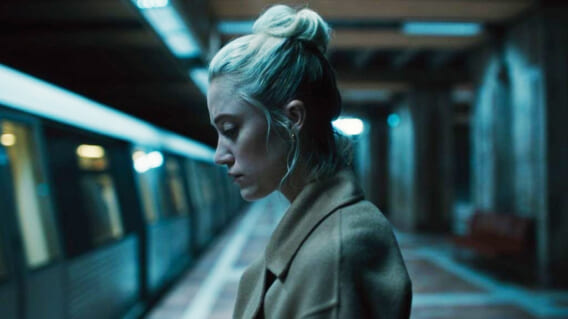 2014 was the year that introduced the world to Maika Monroe. With roles in both The Guest and It Follows, Monroe cemented herself as a certified scream queen. While the term is oft met with derision, there’s no denying that Monroe is a wholesale gift to the horror genre. She imbues her distinct protagonists with considerable range and texture, shifting seamlessly between terror and fervent strength. In honor of Monroe’s role in Chloe Okuno’s Watcher, currently a record-breaking opening for distributor IFC Films, we’ve rounded up Monroe’s best horror performances and ranked them in terms of genre impact. Get spooked, get ready.

This is a controversial pick, for certain. Arguably the movie that cemented Maika Monroe’s genre status, David Robert Mitchell’s It Follows is a tour-de-force of dreamscape terror. In the vein of Carpenter and Roeg, It Follows dominated the horror landscape when released in 2015, catapulting Monroe to overnight success. She stars as Jay, the protagonist targeted by the vicious entity after her boyfriend passes the course to her during sex. Monroe is fantastic, no doubt, but Jay lacks notable agency, too often responding to what’s going on rather than actively engaging. Part of this is the inimitable flair of It Follows, a movie predicated almost entirely on hypnagogic mood. But as a memorable character, Monroe’s vulnerable performance eclipses Jay as a character tenfold.

Maika Monroe certainly isn’t the protagonist in Neil Jordan’s Greta, a psycho-thriller that never gets either too psychotic or thrilling. But there’s a certain charm to the proceedings, mostly thanks to Isabelle Huppert’s antagonist and Monroe’s role as Erica, protagonist Frances’ (Chloë Grace Moretz) best friend and roommate. Monroe is central in one of the most thrilling sequences wherein she’s stalked through the streets of New York City. Better still, she delivers an applause-worthy bombshell in Greta’s finale. With Frances detained in Greta’s house for an unclear period of time, likely months, all hope seems lost. That is, of course, until another young woman arrives, ostensibly falling for the same trap Frances fell for. That mysterious young woman is revealed to be Erica, having spent an indeterminate amount of time tracking Greta down. She saves Frances, drugs Greta, and all but makes Greta as a movie her own.

The long-awaited follow-up to Roland Emmerich’s spectacular blockbuster classic was a masterpiece, no doubt about it, and Monroe co-stars as Patricia Whitmore, daughter of the first films’ former president Thomas Whitmore. In Resurgence… I’m kidding. Independence Day: Resurgence is a dud, and not even Maika Monroe could save it (though she does try her best).

Maika Monroe’s most recent outing, Watcher is a terrifying stalker-thriller in the vein of ‘70s Giallo and Carpenter slashers. It’s a fantastic feature debut for director Chloe Okuno, instantly cementing itself as a contemporary genre classic, one replete with austere chills and an ending so vividly real, that it’s liable to haunt audiences for weeks. Monroe stars as Julia, a young woman who moves to Bucharest with her husband and soon finds herself being stalked by an unknown neighbor in an adjacent building. Of course, no one believes her, even as the behavior of the man watching her grows more erratic and more personal. It’s chilling stuff, and Monroe balances vulnerability with incredulity. Better still, she consistently makes the right choices, only putting herself in danger as means toward protecting herself. It’s gripping stuff and arguably Monroe’s most mature role to date. It’s Monroe that helps to keep Watcher so eminently, well, watchable.

Not enough people saw Villains, Dan Berk and Robert Olsen’s black comedy classic. The chemistry between stars Bill Skarsgård and Maika Monroe could carry an entire movie itself, even without the added benefit of reverse home invasion genre elements. Monroe stars as Jules, one of two lovebird robbers whose car runs out of gas in the middle of the woods. They explore a nearby house for gas, thinking it empty, but soon find a young girl chained up inside. Narratively, of course, Jules is adamant that they free her. But the homeowners return home and capture both Jules and her boyfriend. While never exactly scary, Villains is certainly intense, and Monroe imbues Jules with the perfect amount of comic zest, ensuring the humor never quite eclipses and neuters some of Villains’ more horrific elements. It’s a tough act to pull off, but Monroe is more than capable. While it floundered at release, Villains is more than due for a reappraisal.

It’s The Guest. It’s obviously The Guest. What more is there to even say about Adam Wingard’s sci-fi, action, horror, and literally every other genre all at once masterpiece? The plot alone shouldn’t work. It’s silly, pulpy stuff, sure. But Wingard somehow blends so many disparate elements together with the precision of an enthusiast’s knife. Monroe stars as Anna Peterson, the only daughter of the Peterson clan, and the only one with enough sense to recognize hottie David Collins (Dan Stevens) is up to no good. While the bodies drop and her family is massacred, Anna maintains a cool, grunge edge, racing to rescue her younger brother and ostensibly putting an end to Collins’ super soldier for good. That’s it. She goes toe to toe with an enhanced killing machine and effectively wins. It’s incredible stuff, truly.

That accounts for Maika Monroe’s most seminal horror roles. What are some of your favorites? Are there any other contemporary actors whose horror output merits ranking? Let us know over on Twitter!