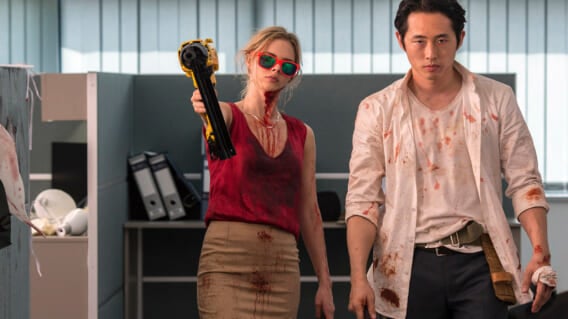 Joe Lynch is one of my favorite contemporary horror filmmakers. He has a unique perspective and has been behind several outstanding efforts that don’t seem to get the level of love they deserve. One such example is the darkly comedic workplace horror film, Mayhem.

Mayhem follows corporate attorney, Derek (The Walking Dead’s Steven Yeun) as he navigates a viral outbreak that causes everyone in his office to lose all inhibition and turn violent and animalistic. Derek finds an unlikely ally in disgruntled client, Melanie (Samara Weaving of Ready or Not). The pair join forces to weather the storm and exact sweet revenge.

One of Mayhem’s greatest strengths is that it does a commendable job of capturing the sense of apathy that comes from being employed by a soulless corporation. Many of us have been there at one point or another. Corporate life has the tendency to suck one’s soul while simultaneously requiring that employees put on a happy face. And that makes for a frustrating and helpless dynamic. On one hand, you loathe your employer. But, you know you cannot bite the hand that feeds you. Mayhem does a brilliant job of sending up the horrors of a toxic work environment before taking the viewer on a revenge spree through which we can live vicariously.

Now, I am not suggesting that violence is the answer to anything. It never is. But cinema gives us a safe space to process negative feelings and emotions in a constructive way. And that’s precisely why Mayhem is so effective. It taps into the rage that anyone that has ever worked for a callous corporation can relate to. And said rage is expertly chronicled by the plight of lead character Derek and his partner in crime, Melanie.

As Derek, Yeun perfectly exhibits the kind of brokenness people feel when trapped in the clutches of cutthroat corporate culture. And he fights back in a way that feels proportionate within his unique set of circumstances. He may have lost all inhibition but he never loses his humanity. And that is crucial to making him an effective protagonist.

Weaving also does phenomenal work as Melanie. The character is a force to be reckoned with out of the gate. There’s no need for a final girl transformation because she comes on the scene and almost immediately demonstrates some serious badassery. Weaving is gifted with some of the best dialogue in Mayhem, courtesy of a fantastic screenplay from Matias Caruso. But the finesse with which said dialogue is delivered is what really makes the words memorable. Weaving sinks her teeth into this role and absolutely kills it.

Lynch does a remarkable job of putting all the pieces together. He utilizes frenetic editing, smartly-chosen musical accompaniment, and a brisk pace to keep the viewer engaged from start to finish.

Lynch also succeeds at finding the perfect tonal balance. The flick is darkly comedic but never overly-cynical. And that is the final piece of the puzzle. Mayhem has a similar setup to The Belko Experiment (which bowed before audiences shortly before Mayhem). But where that film came off as overly mean spirited, Mayhem always knows where to draw the line.

Mayhem is available to stream on Shudder as of the publication of this post. And I would highly recommend giving this under-seen horror flick a shot if you haven’t yet had the pleasure of experiencing it.

If you’d like to chat more about Joe Lynch’s body of work or underrated cinema, please hit me up on Twitter @FunWithHorror.