Chronic Illness, Loss of Autonomy, and Aliens in ‘Dark Skies’

'Dark Skies' is a terrifying look at living with chronic illness. 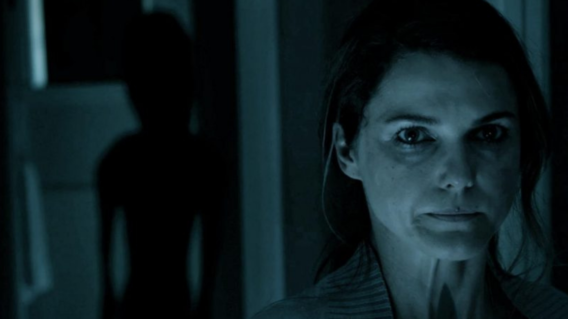 Your autonomy is hijacked. Time is fluid—out of control and easy to lose. Your sense of self is stretched and distorted. It’s like your body isn’t yours anymore. That’s how 2013’s Dark Skies portrays alien abduction; but it’s also how everyday life feels for someone with a chronic illness. The film, best known for its seamless blending of horror and sci-fi, plays out like a standard haunted house story, but with aliens. It drops the audience into the unremarkable lives of the Barrett family, then forces us to bear witness to their torment. But as effective as its aliens-as-ghosts analog is, there’s much more to unpack within the story. Sickness is at the center of all that unfolds.

For me, living with chronic illness means it’s always at the forefront of my mind. I have to consider a multitude of things before taking on any task, whether that be going grocery shopping, or opening my laptop. Any given day I could be any version of myself, depending on my brain and my body, two things I should have sovereignty over, but don’t. When you’re so hyper-focused, it’s easy to find the object of that focus in everything, like movies. But the fascinating thing about Dark Skies is that illness doesn’t only function as an analogy for alien abduction; it’s an actual plot point. First-born son Jesse’s (Dakota Goyo) childhood illnesses are a repeated topic of discussion, and symptoms like allergies and nosebleeds are even used to identify abduction. The reframing of something so often ignored, or pitied, is exhilarating.

But Dark Skies is an unrelenting film where none of the Barrett family are safe from the outside forces that threaten them. From seemingly out of nowhere, Lacy (Keri Russell) and Daniel (Josh Hamilton), along with their sons Jesse and Sammy (Kadan Rockett), begin to experience anomalies ranging from odd to horrifying. The fridge gets rummaged through, kitchen items end up stacked precariously ala Poltergeist, and flocks of birds careen into the house. When security alarms are mysteriously tripped, it’s clear that something is invading the family’s sacred space. Even though man-of-the-house Daniel remains doubtful, he installs cameras. But his watchful gaze doesn’t slow the escalation, and innocuous events like blaring alarms and empty photo frames quickly seem like child’s play.

As the situation worsens, youngest son Sammy becomes the epicenter of activity. He disappears from his room only to materialize outside. He can’t remember how or why he’s on the front lawn, explaining, “I wasn’t me anymore”. His loss of autonomy is chilling, his hangdog expression simultaneously exhausted and confused. It happens again at the park. Sammy stares vacantly into the distance before wetting his pants and offering up a blood-curdling scream. He’s not in control of his body or his senses—something else is driving.

Also Read: ‘Aliens’ and a Powerful Clash of the Matriarchies

When mom Lacy suggests therapy, Daniel, acting as stern authority figure, is resistant, telling Lacy to “not get crazy.” They’re loaded words as he essentially asks Lacy to ignore her eyes and accept her instincts are wrong. Denial is often bedfellows with chronic illness. While it can be employed as a coping mechanism, it often comes from outside in the form of judgment and general disbelief, something Daniel Barrett repeatedly does. This bury-your-head-in-the-sand denial is dangerous and can cause late diagnoses and declining health. Daniel is quick to defend his family. But he’s slow to realize many of the most insidious foes are the ones that can’t be seen.

Sammy’s episode in the park is just the beginning of these physical attacks. Soon after, the rest of the family begins to have experiences of their own. In one of the film’s most jarring sequences, just as she’s on the precipice of finally selling a house, Lacy freezes up. She stutters, her eyes wild. As she struggles to speak, her fingers curl around nothing, grasping at air. Then she’s gone, her body no longer hers as she repeatedly slams her head into a sliding glass door. Her lack of control is horrific. But her helplessness is relatable.

Later, she wakes at home with a giant bruise on her head and multiple missing hours. As she tries to piece together the day’s events, her boss calls. He describes the episode as “some kind of a breakdown,” and he fires her. “I’m sorry,” he says, calling her kiddo, simultaneously infantilizing her and trying to soften the blow. “Just call me when you’re feeling better.”

He doesn’t ask if Lacy’s okay or offer support. His lack of understanding is all too believable and begs the question, if she were sick, why would he treat her with such disregard? Lacy’s boss easily dismisses a woman who “had a breakdown” mere hours before. Illnesses can make people view you as disposable—broken—and empathy is often extended until the moment it’s inconvenient.

That same night, while the couple celebrates Daniel’s new job, Lacy finds him in standing in the backyard. His body is still, and he gazes out at nothing, his mouth open wide. As she calls to him, Daniel’s nose suddenly lets loose a torrent of blood. He rushes back into the house, his white shirt now stained crimson. But he doesn’t remember a thing. The family’s autonomy is systematically overridden, their consciousness hijacked, their bodies merely vehicles for trauma.

Lacy scours the internet. She’s seeking answers but also validation. What she finds are aliens. Ever doubtful, Daniel scolds her. “You know this is the reason we don’t self-diagnose on the internet.” As someone who’s become consumed with figuring out my body’s nonsensical actions, the internet is an invaluable resource to, well, self-diagnose. But in addition to cross-referencing symptoms, the internet can also connect people with shared experiences, and those people can often make you feel seen. The internet is where Lacy finds Edwin Pollard (J.K. Simmons), an alien expert who promises answers.

Upon Lacy and Daniel’s arrival, Pollard pulls out a checklist and runs through a list of alien abduction claims and “symptoms.” At first dubious, especially at the mention of lights in the sky, the mood of the Q&A soon changes. Pollard quickly begins to describe the family’s exact ailments. “Have you experienced any unexplained illness, strange allergies, or nosebleeds?” he asks, wondering if they’ve had blackouts or lost control of their bodies. The answer is of course a resounding “yes.”

Lacy and Daniel’s meeting with Pollard plays out like a support group—or a subreddit—with the man doling out tips like a grizzled veteran. He not only believes them, but he can offer help and guidance. Pollard’s role is that of an elder, guiding newcomers into a world they never wanted to enter. And while his insight is invaluable, his validation is the true prize. Scenes like this underscore how closely related illness and abduction are in Dark Skies; the people at the center just want to be seen, heard, and helped. And that’s what Pollard is able to give to the Barretts.

Armed with a few insights and a little hope, the Barretts get a dog, get some guns, and board up the house. It feels like an impotent attempt, but the alternative is unthinkable. The alternative is giving up. Eldest son Jesse asks why they can’t just call the police. But Daniel knows the disbelief and ridicule that lay down that path; he should, because it’s the same he lobbed at Lacy days earlier. But Daniel now understands what so many living with chronic and elusive illnesses feel: abandoned. I often feel like I’ve been left to fend for myself, like I’m boarding up the windows in the face of aliens from outer space.

The final showdown is a full-scale assault. The lights blink out, and the elongated shadows of alien lifeforms creep through the house. But there’s no battle. In fact, it’s barely a showdown; the family never had a chance. Through no fault of their own, they were chosen, the carcass of their former lives picked clean.

Early in the film Lacy shares a quiet moment with a woman, watching as she guides her daughter through an asthma attack. “It gets easier,” she promises. “My oldest, Jesse, was sick all the time when he was little. It was like he was allergic to the entire world.” It’s the thread that will unravel the whole story, but it’s also deeply resonant. There are days I wake up and truly believe I’m allergic to it all. It’s an alienating feeling that gnaws away at your sense of safety. The cruel twist for the Barretts is they believed they’d outrun it because, without explanation, Jesse’s illnesses vanished, leaving a healthy young adult.

In a twist, Dark Skies’ end reveals the aliens were after Jesse all along, which makes the mentions of his illness all the more intriguing. Did the aliens heal him? Were they the cause, or the cure? It’s an interesting misdirect as scenes with Sammy tell the story of a boy’s deteriorating health, while Jesse’s read more like standard teenage hijinks that could’ve felt at home in a different movie. But, like an ailment that won’t go away, the aliens never strayed too far. Upon rewatch, I was fascinated by a scene I’d previously found superfluous and forgettable.

After his first kiss, Jesse rides his bike home in the dark. With the wind in his hair, he’s joyful and free, beginning the slow climb into adulthood. But the streetlights blink out one by one, eventually leaving him in the dark. It’s a chilling reminder that “good days” often precede the bad, and constant vigilance is a necessity.

With all its mentions of prolonged sickness and abduction-related plot points that, intentionally or not, are brilliant allegories for chronic illness, Dark Skies is cathartic and melancholic. Jesse’s is a tale of a life cut short; a coming-of-age story left unfinished. By placing him at the center of the narrative, we get a unique avatar that traverses the landscapes of illness without realizing it. He is us on our good days, and he ultimately becomes us on the bad. And the aliens, true embodiments of sickness and other assorted maladies, are truly monsters. They systematically alienate victims from both society and their own sense of self. They steal time, equilibrium, and ultimately your body. For many living with a persistent illness, those feelings are all too real.