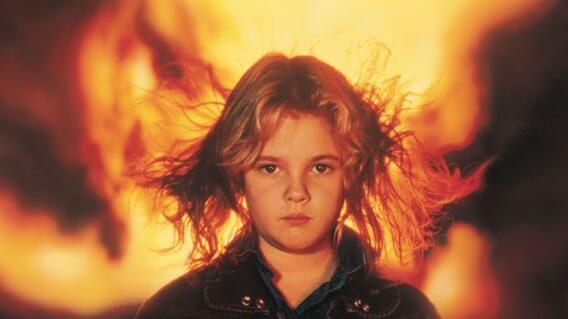 Firestarter is fairly maligned in terms of filmic adaptations of Stephen King’s work. But I think there’s still a lot to appreciate about this 1984 outing. The central relationship between Charlie (Drew Barrymore) and her father Andy (David Keith) is well-realized and comes across as believable. Moreover, the film is effectively paced and features relatively solid performances from a strong cast. So, while this flick may be a little clunky at times, there is still plenty to appreciate about Firestarter.

Firestarter  (which celebrates its 38th anniversary this week) sees Charlie and Andy relentlessly pursued by a shady government organization called The Shop. Andy and Charlie want nothing more than to live a normal life. But The Shop believes Charlie’s pyrokinetic abilities (which pertain to a government trial both of her parents participated in before she was born) ought to be studied and harnessed. Accordingly, The Shop will not rest until Charlie is within their custody and doing their bidding.

While the film isn’t an overwhelming success, it’s certainly entertaining. And part of its entertainment value stems from effective pacing. Charlie and Andy are on the run from The Shop for the first half of the film and spend most of the balance of the picture’s runtime attempting to make a break for it after being apprehended by thugs from The Shop. As such, there isn’t a lot of downtime. So, as long as you buy into the relationship between the central characters, the flick is entertaining, at the very least.

On the subject of the film’s leads, I really do appreciate their onscreen dynamic and consider it to be one of the strongest components of this 1984 adaptation. Even though it’s never explicitly stated, it is clear that Charlie and Andy are bonded by a shared sense of grief. Both are grappling with the loss of Vicky (Charlie’s mother). It is obvious that their shared sense of grief has strengthened Charlie’s bond with her father and brought the two of them closer together.

Another piece of what makes the film work for me is the sense of isolation that Charlie and Andy convey. They are without any other allies in the world. And their mysterious powers make it nearly impossible for either of them to get close to anyone. That strong sense of isolation makes it hard not to invest in their plight.

Additionally, the film also serves up some pretty impressive effects work. And that is never truer than when things get heated (sorry) in the third act. The fire effects still look quite good, even nearly 40 years after the film’s initial release.

So, if you decide to check this 1984 adaptation out before streaming the remake (which is now available on Peacock) try not to go too hard on it. The flick is entertaining and effectively paced. So, you could do much worse. Ultimately, I think there are the makings of a good movie here. The execution isn’t perfect. But Firestarter still isn’t without merit.