This Frozen ‘Are You Afraid Of The Dark?’ Episode Will Chill You To The Bone

Someone get this kid a sweater. 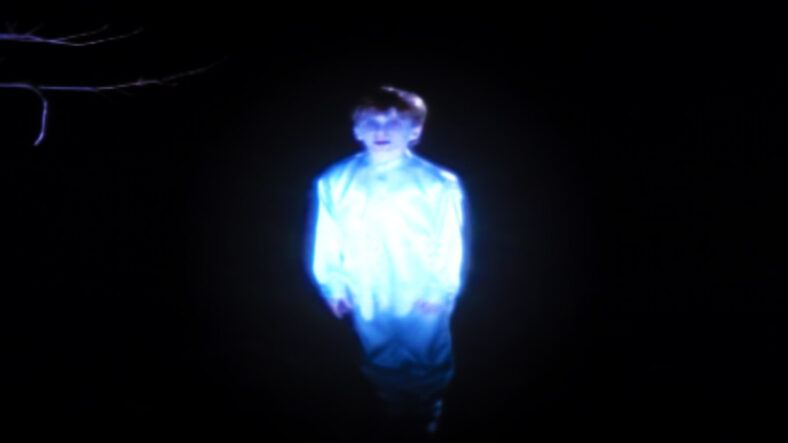 Are You Afraid Of The Dark? was quintessential gateway horror for an entire generation of doomed millennials. From that scary blue goo in the The Ghastly Grinner episode, to the Southern Ontario surrealism of the mall featured in The Pinball Wizard; this series fully intended to mess up an entire generation of lonely 1990s Friday night weirdos.

There are countless episodes I’d love to discuss, and maybe one day I’ll get to them all. But, as Toronto faces its worst snow storm in half a century, there was only one true option ahead of me. The Tale of the Frozen Ghost is memorable for a cornucpia of nostalgic reasons. This episode stars a future celebrity (Melissa Joan Hart) in a fairly stellar (albeit cartoonishly snarky) performance. It also enlists two spooky elderly aunts who are absolute stars (Sara Lee Stadleman and Sandra Scott). And it goes hard on the Sam Raimi-style camp-horror atmosphere. I’m talking about POV tracking shots, sentient rocking chairs, fast-forward shaky cam … you get the idea.

Sure, Melissa Joan Hart is a scene-stealer in this frosty relic, no doubt about it. However, the true star of the show here is the titular frozen ghost. Our phantom is a little boy (Michael Caloz) with a classique mid-90s bowl cut. He also sports shiny white satin pyjamas as he appears outside of our main characters window, declaring “I’m cold” in the indifferent docile tones only a low-rent non-union Canadian child actor of the 1990s can truly pull off. If there was only one Are You Afraid of the Dark themed GIF left on this planet, this is it.

The story for The Frozen Ghost sees a young wealthy child named Charles (played by Andrew Henry) forced to visit his two elderly aunts. He’s accompanied by his impatient nanny, Melissa Joan Hart, who has literally no time for his snotty rich kid drama. On arrival to his aunts home (who are, in my gay-ass opinion, clearly queer-coded) he is quick to learn that a ghost is known to haunt their rickety, middle of the woods premises. Well, sure enough, poor prestine little Charles wakes up in the middle of the night to see the frozen ghost beneath his window. All the ghost can manage to muster in his illumoious satin PJs is “I’m cold.” I wont bother you with much more of a synopsis, but let’s just say this dead kid is looking for a goddamn sweater. Aren’t we all? It’s so goddamn cold!

If you’ve been meaning to revisit Are You Afraid of the Dark?, might I suggest starting off with this seasonly apporporate favorite? It has got everything you’re after this time of year. Spooky ghosts who would benefit from layers, Melissa Joan Hart, mature ladies in love, and some honest to goodness scary atmosphere. What makes this particular episode so eerie is the sadness it surprisingly evokes, even so many years after it was first broadcast. This poor kid died and he’s cold as hell. Someone get him a sweater, I’m a chilly billy just thinking about it!

Check out the full Are You Afraid of the Dark? episode right here: