The time for animal revenge has come. 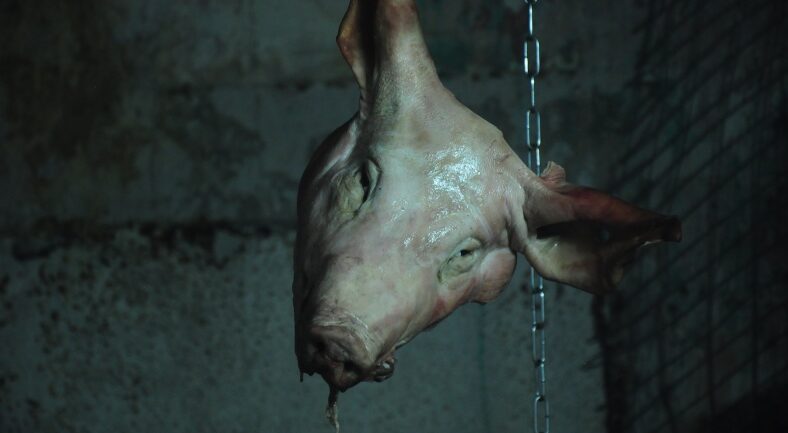 Throughout the mid-2000’s I encountered the infamous PETA (People for the Ethical Treatment of Animals) videos. Whether you believe PETA is controversial or not, their tactics with those videos were effective. Seeing constant depictions of animal cruelty traumatized me to the point that I can still visualize certain frames in my head perfectly even fifteen years later. Still Life (Naturaleza Muerta, 2014) uses those same tactics. This low-budget Argentinan slasher force-feeds you facts surrounding animal cruelty, the greenhouse effect, and the debate versus animal rights and ecological issues. The fairly simple plot lets director Gabriel Grieco hone in on his message with his directorial debut: Don’t eat meat!

In the first few minutes, Grieco gives us a tense cold opening. Just like the other low-budget Argentinian film mentioned in this column, Plaga Zombie, Still Life wears its influences on its sleeve. We see a kidnapping of one of the town’s wealthiest daughters Julia Cotonese (Mercedes Oviedo) as she sits alone in a massive house framed by nonstop moving POV camera shots to instill tension. As an underappreciated city journalist named Jazmin Alsina (Luz Cipriota) enters this rural Argentinian town famous for its cattle farms, she comes across the wallet of the now missing Julia. Seeing this as an opportunity to outshine her co-workers, Jazmin attempts to unravel the mystery behind the disappearance. The more Jazmin peels the layers off the mystery the more mysterious the people around her become.

Throughout the film, Jazmin comes across multiple men that run the small town due to the size of their farms and their massive production rate. Due to this huge amount of slaughter, animal advocate Dan (Amin Yoma) repeatedly comes to front gates for a talk but is always met with closed doors. So instead, Dan continues to try and teach the small town about the dangers of the meat industry with lectures and pamphlets. There are multiple scenes where Dan is teaching a class not just to students, but to the viewer, as well. Director Grieco uses these sequences to his advantage to blatantly display the theme. However, these moments are often slow-moving and feel both preachy and overbearing.

Violence is essential to horror. The difference whether it’s off-screen or the spilling guts fill the frame is up to the director. Sometimes budget constraints affect the mindset of the director. In this case, Grieco did his best with what he had. I’ll be the first to admit that production-wise the budget does show through the lens and it’s tough to carry a mystery throughout the entirety of the film. Regardless, this film still left me impressed. Grieco was able to create great kills with such a small budget. As slasher films go, the kill count reaches close to ten people, which should be enough to satisfy any gore-filled needs.

Just like Robert Rodriguez’s $7,000 film El Mariachi, Grieco uses certain filming techniques to fit within his budget. Instead of giving us over-the-top kills from the beginning, everything is saved until the effective climax. Still Life follows the creature feature trope of less is more when it comes to violence. Not displaying your kills isn’t anything new. A film could be trying to reach a PG-13 rating and imply kills with blood spraying towards the wall like in Paul W. S. Anderson’s Alien Vs. Predator. Or it could hold off on the monsters and the gore like in Jeremy Gardner’s After Midnight. Here, I was able to overlook the off-screen deaths because of the narrative at hand.

Up until the climax, the film is virtually bloodless. But when the blood comes, Still Life uses all it has to hone in on its theme with slasher-esque kills. Inside a lair that resembles a dirty bloody room ala The Saw franchise, all of the missing people are chained up. The masked killer proceeds to slaughter the remaining living people in the style of animal cruelty videos: bludgeoned to death, neck sliced while hanging and other treacherous kills. With each death, the fake human blood is intercut with shots of real animal cruelty videos.

Argentina and Its Famous Cattle Region

Actions speak louder than words. I’ve already mentioned how Still Life force-feeds you its theme like how farmers overfeed their cattle. But the similarities are done for good reason. Argentina is one of the world’s major exporters of soybeans, wheat, and meat, with meat being the most important. Just to give you an idea about how much food is exported from Argentina, as of January 2022, according to the Foreign Agricultural Service, Argentine beef exports for the year are forecast at 630,000 tons carcass weight.

Although Still Life has flaws, it’s a great example of low budget film successfully working towards its goal even if the means of getting there is through a rough and unsteady road. A cautionary advisory must be in place as the real horror within this film is the PETA-esquse videos of the animal violence caused by consumerist farms. But you never know. Maybe Grieco’s narrative and storytelling style might be enough to make someone change their mind about consuming meat.