Addison Peacock writes about the use of cannibalism to symbolize female characters' ache for something more. 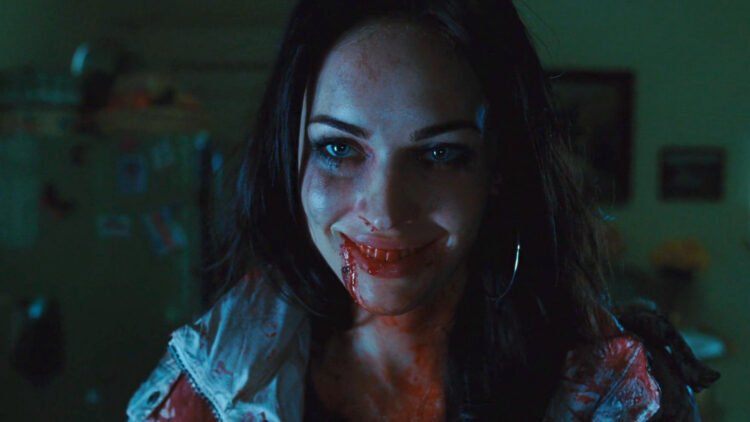 During a conversation about our favorite horror movies, a friend of mine once pointed out to me, “You like films about women who eat people.” I laughed at the time, because of course, they were right. But that thought rattled around in my head for months afterward. Ask me to list some of my favorite contemporary horror films and my go-to titles include Jennifer’s Body, Raw, Ginger Snaps, and, most recently, The Lure. Over and over again, I am drawn to stories of women developing unnatural appetites, and going to extreme measures to satisfy them. These women are not only hungry in a literal sense. These stories often weave together the carnivorous hunger for meat with an ache for something more; for sex, for power, for fulfillment. These are stories about women who, at their very core, want.

I have always had a complex relationship with my own hunger, for food and for other physical pleasures. I realize this is depressingly common in a society that insists women restrict and restrain no matter what; counting calories and saying no to sex unless it’s with the right man, at the right time, and making sure it was his idea. Any deviation from this acceptable behavior is cause for shame. In college, this shame was my closest friend and confidante. It whispered hatred in my ears any time I stepped outside of the realm of acceptable wanting.

I remember skipping meals, feeling a perverse sense of pride at the growling emptiness in my stomach, thinking it made me strong. I remember being in bed with someone and feeling a sudden wave of nausea wash over me; there was the sense that I was doing something wrong by being here, by aching to touch and be touched. I did whatever I could to shut the shame up; drinking to drown it out; sleeping all day where I hoped it couldn’t get me. But it was never really gone. It would come creeping back in to say, “you’re filthy, you’re disgusting, you don’t deserve to be full.” And all I could do was nod along.

Finding A New Kind Of Hunger

Then, I saw Raw. I saw Justine, crouched on the floor, licking blood from her fingers with reverence. I saw her, in the middle of sex and at the height of ecstasy, bite down on her arm until it bled. At that moment, all her hungers sated at once. It was disgusting, it was animalistic, it was the first thing I’d ever seen that made the shame go silent. Watching Justine’s descent from a reserved girl, unable to stand up for herself, to a hedonistic creature who grabs what she wants and feasts on it, was shockingly cathartic. By the time the film was over, I had a new craving that I needed to satisfy.

Other films soon followed. They all had the same central themes of women turning feral and feasting with monstrous abandon while also often exploring their burgeoning sexuality. In Ginger Snaps, Ginger equates her sexual impulses with her newfound werewolf appetite: “I get this ache, I thought it was for sex…but it’s to tear everything to fucking pieces.” When the guy she’s losing her virginity to tells her to lay back and let him take charge, she refuses. Instead, she takes a bite out of him.

In Jennifer’s Body, Jen makes a bloody meal of the boys in town, but she also finally feels free to act on her attraction to her female best friend Needy.

In The Lure, one of the two mermaid sisters, Golden, feeds on and has sex with locals whenever she wants, while her sister restrains herself and eventually suffers greatly for it. From Jennifer tenderly kissing Needy with a stomach full of human flesh, to Golden dragging herself along the shoreline with a man’s stolen heart between her teeth, each film had a moment that left its lead completely sated, with a full stomach and a spent body. I imagined them curling up like a big cat to purr themselves into the deepest, most blissful sleep. All I could think was, I would love to sleep like that.

Please don’t mistake me, it’s not that I secretly fantasize about cannibalism. I’m a vegetarian, the thought of eating any meat, let alone human, turns my stomach. It’s not about a hunger for real-life violence either. It’s about ownership of a part of womanhood that we don’t want to look at; to acknowledge women as human, and therefore as animals, too. For someone who’s had that agency stripped away, for someone who’s been pushed around for it, shamed for it, wanted to shrink herself down and flush it down the toilet—it’s electric. By devouring other human beings, in a metaphorical sense, these women are literally eating life. As someone who has felt like a prey animal—all darting eyes and shaking hands and exposed tender heart—it’s intoxicating to see myself as the predator for a little while.

Of course, we aren’t just predators at our core. We have the capacity for love, for empathy, for softness. These films account for that aspect of womanhood as well. Each of the films I’ve mentioned has a foil to the predator. There’s Needy in Jennifer’s Body, who is terrified of Jennifer’s transformation; Silver in The Lure, who is disgusted by her sister’s behavior and sets her sights on the love of a human man.

We Need To Eat

However, just as we can’t be hungry all of the time, we also can’t live a life entirely of repression. Needy is unable to survive the events of the film without absorbing some of Jennifer’s powers. She becomes a little bit of a monster herself. Silver’s refusal to satisfy her hunger, and willingness to mutilate her own body in an attempt to win a man who does not love her, ends up killing her. She dissolves into sea foam as she dutifully dances with her love at his wedding to another woman, rather than feeding on him to save her life.

Stories of women who satiate their hungers at all costs are, of course, not without their flaws. There is a place for flawed stories that excavate the messiest, darkest aspects of womanhood; if not just for the catharsis, then for the chance to see a mirror held to the secrets we feel like we have to keep. If we listen to the voices that insist we keep these parts of us locked away, that we starve. We sit still and hold in our screams; we cannot survive it. Like Silver, we will dissolve into nothingness and leave our weeping sisters behind. Until I have the tools to quiet those voices for good, I am more than happy to rest in the predator’s den.

Sometimes the only way to keep from coming apart is to look to the animal within, stare our desires in the eyes, and refuse to blink. To strip our pretenses away and emerge as the rawest version of ourselves. Someone that is unafraid to make a mess, to stain our pretty dresses, to take a big, juicy bite out of the world and swallow it down. I’m hungry. Aren’t you?